Devo at Best Buy Theater in June (more by PSquared) 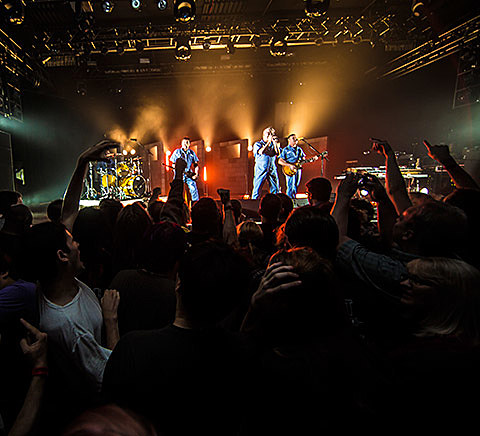 The CBGB Festival returns to various NYC venues this week, beginning Wednesday (10/8) and continuing through Sunday (10/12). It includes the Billy Idol keynote interview/acoustic set at Center548, The Muffs show, the Daniel Lanois film show, and plenty more. There's also the big free Times Square show on Sunday (10/12). When we last spoke, we mentioned it was speculated that Jane's Addiction, Robert DeLong, Devo, Surfer Blood and We Are Scientists would be playing, and that is in fact the lineup (along with Cheeky Parade). Cheeky Parade go on at noon and Jane's headline at 6:15 PM.

Full schedule here. Some highlights including the Times Square schedule, below...

· An Evening with DJ Dirty South: With You Screening, Q&A and Listening Party - 6:00PM at Landmark Sunshine Cinema

· I Need a Dodge! Joe Strummer on the run Premiere - 12:30PM at Anthology Film Archives

· We Are Scientists Performance - 12:30PM at Times Square North Stage