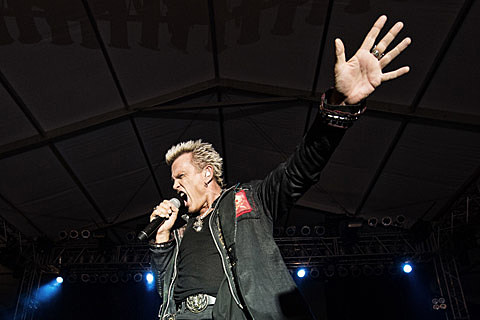 As previously discussed, the CBGB Music & Film Festival is returning to various NYC venues from October 8-12, and since we last spoke there's been some updates to the festival. We knew Billy Idol would be participating this year, and we now know that he'll be the interviewee at the keynote interview and will also perform a short acoustic set. That takes place October 9 at CBGB Fest HQ Center548 (548 W 22nd St), two days after his autobiography comes out and a couple weeks before his new album comes out. Walking Papers (featuring GNR's Duff McKagan), The Skins and Ex-Cops will also perform. Tickets for that event are on sale now.

The majority of the festival's schedule has also been posted. It includes the Muffs / Miriam / Upset show at The Bell House, Macy Gray at City Winery, and a handful of other shows. Check out the full thing here.

Daniel Lanois, who has a new album and curated the ANTI-Thesis show, is showing clips and discussing past works as part of the film portion on October 8 at Landmark Sunshine Cinema. Tickets for that are on sale now.

CBGB Fest also confirmed early on that there would be an event in Times Square again this year. Last year that was where their biggest bands played for free with the lineup and location announced really last minute due to city regulations. This year, Devo, Jane's Addiction, We Are Scientists, Robert DeLong and Surfer Blood are still without a confirmed venue with less than a month to go before the festival, so it makes sense that this year's Times Square concert will in fact be those bands. Plus Devo confirmed on Facebook that they're playing a free concert on October 12 for CBGB Fest ("exact location TBA") and MyFreeConcert is also listing those five bands as the Times Square lineup for that date.

We Are Scientists and Surfer Blood will also be touring together surrounding CBGB Fest. Those dates are all listed below...