Lou with Refused at Terminal 5 (more by BBG) 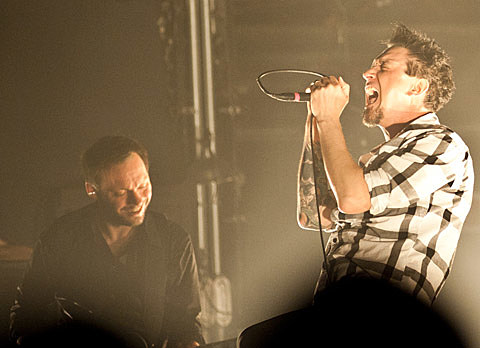 As originally discovered back in January, and further confirmed in Summerstage's 2012 schedule (but previously with no artists) CBGB is throwing a festival...

The four-day festival is scheduled to begin on July 5 and will showcase about 300 rock bands. Concerts will take place at around 30 places, from large stages like Central Park Summerstage and Webster Hall to small clubs like the Trash Bar in Williamsburg and the Living Room on the Lower East Side...

The festival will also stage a free concert in Central Park with Guided by Voices, the Pains of Being Pure at Heart and Cloud Nothings [on July 7]. A few veteran rockers have agreed to appear: David Johansen, a former member of the New York Dolls, has committed to do a show, as has the Baseball Project, the supergroup formed by Peter Buck of R.E.M. and Steve Wynn of Dream Syndicate. -[NY Times]

A few other confirmed shows as part of the festival have emerged too. Sick of It All will join Vision of Disorder, Cro-Mags, Absolution and Sai Nam for a show at Webster Hall on July 6th. Tickets are on sale.

D Generation will headline Bowery Electric on July 7th with ROMANS, Brass Knuckle Evangelists and The Bamboo Kids. Tickets are on sale.

Stay tuned for more (including the full lineup announcement).