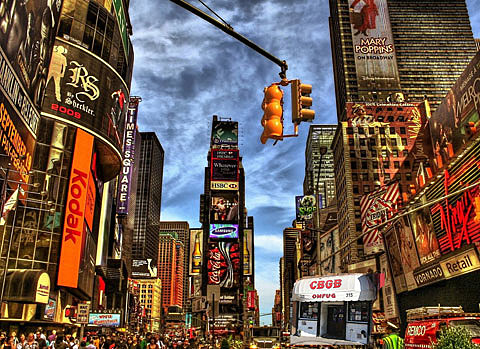 Not too much has changed on the CBGB Festival schedule since we last spoke, but we found out and have confirmed that the multi-day (July 5-8), multi-venue, multi-genre NYC festival will host a free, multi-stage event in Times Square on Saturday, July 7th. The outdoor Times Square show, in addition to live music, will also have food, drinks, music shop booths, and music themed activations for people of all ages. We can't say WHO is playing in Times Square, but we do know that unlike Fidlar, Redd Kross and Dale Earnhardt Jr. Jr., the following CBGB Festival bands are still venueless: Clap Your Hands Say Yeah, The Hold Steady, and Superchunk. Stay tuned for more info.

That said, it's pretty impressive that they pulled this off and it's definitely a rarity to be able to host a big, outdoor event, let alone a rock show like this in Times Square. It has also proved me wrong, at least to the person I was talking to at NXNE in Toronto when I said, "they would never do anything like this in NYC".