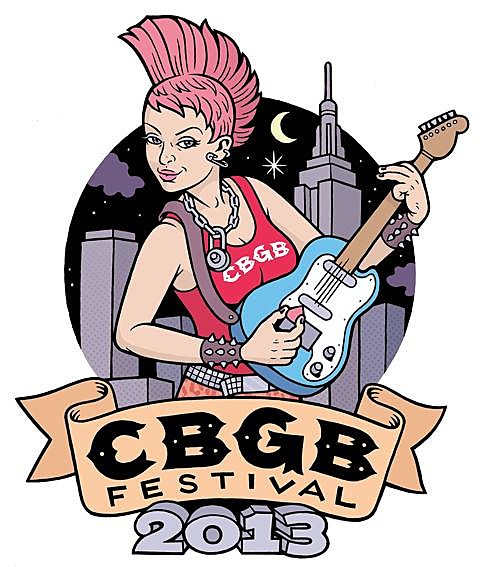 The 2013 CBGB Festival happens this week, kicking off on Tuesday (10/8) with the premiere of CBGB: The Movie at Landmark Sunshine. You can still get tickets to the premiere (though, at $50, they're not cheap). Then on Wednesday (10/9) the festival starts in earnest with music showcases around the city, a pretty enticing film festival, industry talks, photo exhibits, and a Thursday (10/10) keynote address featuring Duff McKagan and a reconstructed CBGB interior.

If you'd like to attend for free, we're giving away four pairs of music/film badges which "allows badge holder into Music Showcases and Film Screenings only on first come/first served basis. Does not include Music or Film Conferences." Details on how to enter are below.

On the music side of things, notable shows include the BV-presented Judge and Manipulate show at Saint Vitus on Friday (10/11); the huge, free show in Times Square on Saturday (10/12) with My Morning Jacket, Grizzly Bear, Divine Fits and a James Murphy DJ set; and the Carry On Band show at Bowery Electric on Thursday (10/10) with  Lydia Lunch, Glen Matlock, Sylvain Sylvain, Lenny Kaye, Richard Lloyd, Cheetah Chrome (one of two CBGB appearances for him) and more.

A few others: Bell X1 and Tristen play Bowery Ballroom on Saturday (tickets); recently rejuvenated '90s shoegazers The Veldt play Cameo on Thursday (10/10) with Heaven and Miracle Falls; Massachusetts metal band Killswitch Engage will be at Santos on October 12 with Eye Ra Haze (tickets); and Dale Ernhardt Jr. Jr. and Atlas Genius at Irving Plaza  on Thursday & Friday (tickets). There are lots of other bands playing, you can check out the whole schedule.

On the film side, in addition to CBGB: The Movie, you can catch such films as Bad Brains: A Band in DC, Big Star: Nothing Can Hurt Me, Cosmic Psychos: Blokes You Can Trust, Filmage: The Story of Descendents/All, Geek USA, Jimi Hendrix: Hear My Train A Comin', Led Zeppelin Played Here, Montreal Underground, Pleased to Meet Me, Pussy Riot: Putin Pissed Himself, Searching for Sugarman, The Blank Generation and more.

There's also the "Never Again" photo exhibit at Wooster St. Social Club featuring many BV photographers. Opening night party for that is Wednesday from 7 - 10 PM and is free.

======================
For a chance at winning a pair of music/film badges for the 2013 CBGB Festival: either tweet something that includes both @BrooklynVegan AND "CBGB FEST" in the tweet, or send an email to BVCONTESTS@HOTMAIL.COM with the subject line "CBGB FEST". Include your first and last name in the email. We'll pick a winner at random and contact them with more details. If you enter by email, it will not be shared with anyone else. Good luck!

PLEASE NOTE: Badges allows badge holder into Music Showcases and Film Screenings only on first come/first served basis. Does not include Music or Film Conferences.