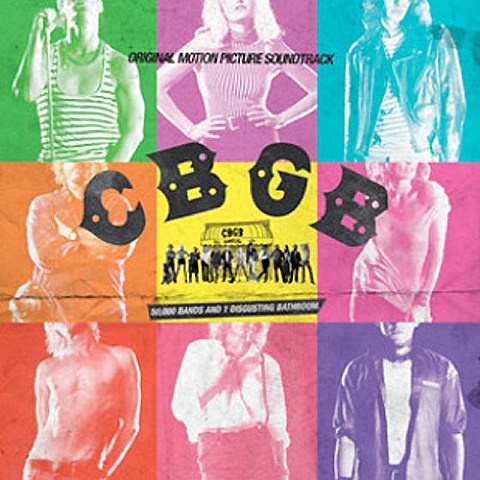 As previously mentioned, the CBGB movie will premiere at this year's CBGB Music & Film Festival, which goes down across various NYC venues from October 9 to 13.

The tracklist for that movie's soundtrack was just revealed, and while there's not too much you don't already have if you're already into this stuff, it should make a great classic-punk 101 for anyone who's yet to have discovered these gems. The soundtrack will feature classic tunes from Talking Heads, The Stooges, Dead Boys, Richard Hell & the Voidoids, Television, Wayne County & the Electric Chairs, New York Dolls, The Velvet Underground, Johnny Thunder & the Heartbreakers, and more. Plus, there's some live tracks, demos, and alternate versions of songs from other beloved bands like Blondie, MC5, The Dictators and more. The soundtrack will be out on October 8 via Omnivore Records physically and Rhino digitally.

Check out the full tracklist and some videos below...

CBGB: Original Motion Picture Soundtrack Tracklist:
1. Talking Heads "Life During Wartime"
2. MC5 "Kick Out the Jams (Uncensored Version)"
3. New York Dolls "Chatterbox"
4. Television "Careful"
5. Richard Hell & The Voidoids "Blank Generation"
6. Flamin' Groovies "Slow Death"
7. The Velvet Underground "I Can't Stand It"
8. Wayne County & The Electric Chairs "Out of Control"
9. The Count Five "Psychotic Reaction"
10. Tuff Darts "All For the Love of Rock 'n' Roll" (Live)
11. Johnny Thunders & The Heartbreakers "All By Myself"
12. The Dictators "California Sun" (Original Demo)
13. Dead Boys "Caught With the Meat in Your Mouth"
14. Joey Ramone "I Got Knocked Down (But I'll Get Up)"
15. The Laughing Dogs "Get Outta My Way"
16. Blondie "Sunday Girl" (2013 Version)
17. The Stooges "I Wanna Be Your Dog"
18. Dead Boys "Sonic Reducer"
19. The Police "Roxanne"
20. Hilly Kristal "Birds and the Bees"