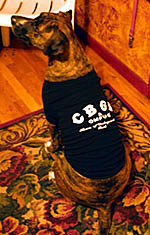 Gothamist has a story today, and it says:

"We have it on good authority that the legendary venue is still alive in spirit, and angling to take over a new space in Manhattan. With the contents of the original club still around in a basement somewhere, if all goes according to plan it will even look like the old space. We'll update when we have more information, which should be filtering in over the next few weeks."

Hmmm. I don't want to knock a possible new space for live music, but like their idea of re-opening in Vegas, this just has tourist written all over it.

In related news, I noticed that there's a CBGB Twitter which claims to be "official", and on it they tweeted earlier this month, "who would you like to see at the #CBGB Music Festival this summer? No band to big or to small."