"Omar Rodriguez Lopez Group turned out to basically be Mars Volta. Cedric cut all his hair off. Still has the slick foot moves though." - Joey 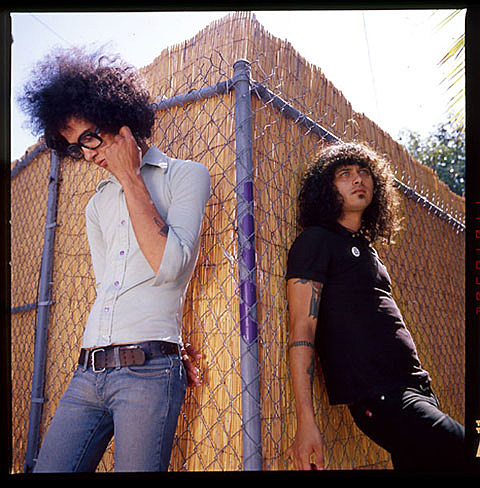 Times Square: You're playing the Highline Ballroom on the 29th in NYC. What are your thoughts on the city and its music scene?

Omar Rodriguez Lopez: New York's cultural diversity speaks for itself. There's so much to check out. If you walk down the street you'll hear a different language or dialect on almost every city corner. The music obviously mirrors that diversity....

Times Square: Your music comes off as quite complex. In light of the fact that you aren't formally trained, how do you write music and then communicate it to your band?

Omar:Writing just happens. It ends up being intuitive. It's just documenting internal monologue. As far as communicating music to my band goes, I'll either give them recordings, show them their parts with my guitar, or just sing to them.... We'll practice a few times before a tour. Then I'll show them new material that we'll insert into the show the day of the concert. Fans often mistake the new material for improvisation because they don't recognize it.

Omar Rodriguez-Lopez has been inserting new material into his recent sets, but not just solo stuff. His other half in The Mars Volta, Cedric Bixler-Zavala, has been out on the road with the Omar Rodriguez-Lopez Group, and they've been performing new Mars Volta material, as you can partially see in a series of videos below.

The tour hits Highline Ballroom in NYC TONIGHT (3/29). Advanced tickets are now sold out, but the venue says "LIMITED TICKETS WILL BE AVAILABLE AT THE DOOR AT SHOWTIME."

UPDATE: a few more tickets will also be online around 4:30pmEST.

All tour dates and those videos are below.