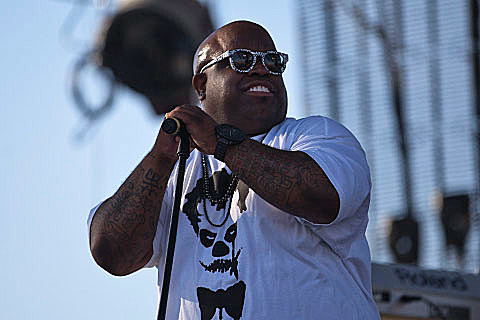 Cee-Lo Green, Goodie Mob member, Gnarls Barkley member, solo artist and former judge on The Voice, also had a series on TBS, The Good Life, which has now been cancelled. It's being widely reported that the show was cancelled after Cee-Lo's tweeted some despicable comments about rape and consent, though a source tells Variety that the show had already been cancelled earlier this year.

The tweets everyone is talking about were posted by Cee-Lo after he was let off pretty easy after pleading no contest to rape in a case where he's accused of slipping a woman ecstasy at a restaurant and taking her home in 2012. His tweets implied that it's only rape if the other person is conscious. "If someone is passed out they're not even WITH you consciously! so WITH implies consent," one tweet read. "People who have really been raped REMEMBER!!!," read another. He continued, "when someone brakes on a home there is broken glass where is your plausible proof anyone was raped," and "so if I TRIED but did NOT succeed but the person said I DID then what really happened?"

A possibly-not-necessary-petition, claiming to have received over 30,000 signatures in less than 3 hours today, had also been launched to convince TBS to take his show off the air.