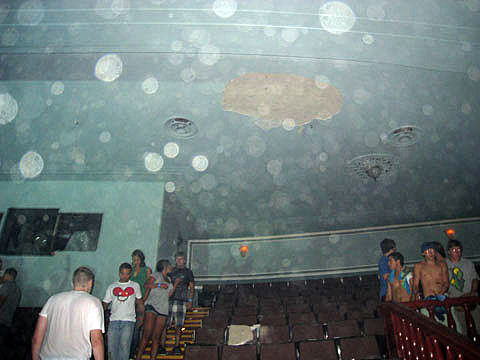 Wellmont Theatre is temporarily closed -- and its scheduled show of Interpol Wednesday night [is definitely] canceled -- after a piece of the ceiling fell from the upper balcony during the Deadmau5 last week.

Louis Litvin, a Wellmont partner, confirmed that Robert McLoughlin of the Montclair buildings department had closed the Wellmont following the incident. Litvin added that one concertgoer was taken from the theater in an ambulance, but that the injury appeared to be minor and the victim was able to walk after being struck.

Litvin said that an engineering team with thermal imaging equipment is currently inspecting the entire building, ceiling and walls, and that management will do "whatever we need to do to protect the public."

"Once we do that and Bob McLoughlin is comfortable, the show will go on," Litvin said. The Wellmont hopes that all the repairs are done in time for the Lyle Lovett concert scheduled for August 15." [Baristanet]

...while performing onstage at the 9:30 Club in Washington, D.C., electronic music performer DEADMAU5 (pronounced "dead mouse") collapsed, suffering from exhaustion. Medics at the venue took him directly to hospital where he is now under supervision.

DEADMAU5 is sad to inform his fans that on the strict advice of the doctors, he now has no choice but to cancel the next nine shows of his summer tour schedule to allow for his recovery. The dates affected are listed below. Meanwhile, his North American dates for October which include appearances at Austin City Limits, the Treasure Island Music Festival, Voodoo Music Festival and three nights at Roseland Ballroom in New York City are still on course.

And as it says above, Wednesday night's Interpol show is cancelled. Poor Interpol. First Bono. Now the ceiling. Stay tuned for refund/rescheduling info.

Video of Deadmau5 collapsing, with the cancelled dates, below...