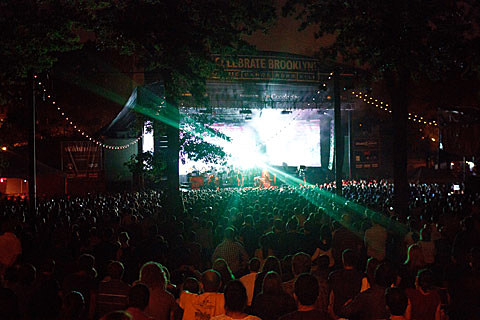 We've known about a few Celebrate Brooklyn! shows already (Belle & Sebastian / Yo La Tengo, The Roots with Jim James, Beck), but festival has announced their full 2013 schedule which includes Big Boi, Amadou & Miriam, Calexico, Mavis Staples, Cody Chesnutt, Os Mutantes, The Waterboys, Jamie Lidell / Dan Deacon, and They Might Be Giants... all of which are free. Celebrate Brooklyn! kicks off the season with a free show with Patty Griffin on June 5.

The full Celebrate Brooklyn! schedule is below.

American folk icon Patty Griffin's timeless songs are "sharp character sketches whose surface modesty often belied a piercing heart" (Boston Globe) that stand among the wonders of the modern songwriting world. Her singing, which possesses startling power and emotion, is as unmistakable and inimitable as her writing. American Kid (New West Records, May 7) is her first album of mainly new material since 2007's Children Running Through (2007). In between, she made the GRAMMY®-winning Downtown Church (2010) and became a member of Band of Joy, the group in which leader Robert Plant and his cohorts meld British and American folk, rock and spiritual music. These are just the latest creative endeavors in a two-decade career that has consistently brought her immense acclaim for her live performances and recordings, and seen covers of her iconic songs by the Dixie Chicks, Reba McEntire, Emmylou Harris, Bette Middler, Miranda Lambert, Solomon Burke and Kelly Clarkson, among others.

Wynton Marsalis brings "the greatest large jazz ensemble working today" (Chicago Tribune) to the Bandshell with a very special kid-friendly repertoire for the Festival's annual Ezra Jack Keats Family Concert, a celebration of the groundbreaking children's author (and notable Brooklynite). As always, Keats stories will be read during the break--this time, by Mr. Marsalis himself. Stroller parking will be available on site.

Grouplove's anthemic sound "is like a musical antidepressant," (SPIN) where every big guitar hook and sing-along chorus feels like a personal invitation to get in on the action. They share the night with the "twinkling compositions of dreamy indie pop" (Beat Magazine) of the band Alpine, who are riding a wave of Phoenix and Lykki Li comparisons to stardom in their native Australia.

NPR Music has said that Mavis Staples' voice "possesses a sultry, burnt-sugar glow," and that "she turns a simple pop song into a lament that could move a listener to tears." The soul legend won a host of new fans with her 2010 GRAMMY®-winning Jeff Tweedy collaboration You Are Not Alone, and she remains "one of the world's mightiest gospel pop singers" (Time). Staples shares the bill with the iconoclast Cody ChesnuTT, who combined funk, soul, hip hop, rock and blues on his 2002 double album The Headphone Masterpiece, went quiet,and then returned a decade later, to much acclaim, with last year's Landing on a Hundred.

The dark drama of Calexico's desert noir, a mix of traditional Latin sounds with Southwestern country, 50s jazz and rock, "has proved that the borders between styles can be as blurrable, as mutable, as porous as those separating countries and cultures" (Pitchfork). Also on the bill is the great Afro-Peruvian singer Susana Baca, whose "cool, distinct voice (is) as beautiful as any working in pop" (The New York Times); and a wild collaboration between Mexican folklorists Radio Jarocho and the pan-African percussion and vocal group Akoko Nante Ensemble.

Amadou & Mariam's 2012 album Folila, which featured guest spots by Santigold and TV On The Radio among others, was hailed by Pitchfork as a "seamless synthesis of the music of their homeland and the music of the rest of the world." The evening begins with Tuareg guitarist Bombino's first NYC performance since the recent release of his critically lauded Nomad, which was produced by The Black Keys' Dan Auerbach, and which prompted Rolling Stone to call him "a new guitar hero."

The legendary South African choral group, still led by its indomitable founder Joseph Shabalala, first won international fame through its work on Paul Simon's 1986 album Graceland, but the group has been active for more than half a century. Today they are the living embodiment of Zulu song, and a mobile academy of South African culture. Simon has said, "It isn't merely the grace and power of their dancing or the beauty of their singing that rivets the attention, but the sheer joy and love that emanates from their being." With the soulful singer and guitarist Aurelio Martínez, the standard-bearer of Garifuna music and the first black member of Honduras' National Congress.

Brazilian Tropicália trailblazers Os Mutantes, whose psychedelic collision of The Beatles, John Cage, and Bossa Nova is "pop at its very best and most innovative" (SPIN), headline a proper airing of the storied label Luaka Bop, founded by David Byrne and devoted to dance music from across the globe. Javelin brings a sound collage "like an otherworldly radio station based in some crate-digger bunker where genre distinctions are a distant memory" (Pitchfork) to the party, and the Sierra Leonean Bubu master Janka Nabay starts things off on a festive, frenetic note.

Theophilus London, "a man who seems to have studied his Prince, his Andre 3000, and, especially and perhaps most surprisingly, his PM Dawn" (Philadelphia Inquirer), "aggressively pushes modern hip-hop into indie rock hipsterdom" (SPIN) "like a boastful, macho Janelle Monáe [who] attempts to bridge the 1950s and the 2050s" (Details). French-Cameroonian Afro-pean soul sisters Helene and Celia Faussart a.k.a. Les Nubians, share the bill. Brooklyn natives Aabaraki open the evening.

The Latin Alternative Music Conference returns this year with a triple bill of traditional and modern Mexican music headlined by Tijuana's Nortec Collective. Led by founders Bostich and Fussible, Nortec Collective continues its "amazing deconstruction of norteño DNA: accordions, the acoustic guitar called bajo sexto, the funky two-step polka popular in rural areas along the U.S./Mexican border, and the steady four-on-the-floor beat that can propel a dance floor to delirium" (NPR). Mexican Institute of Sound brings its own fusion of folk and electronica, and Mariachi Flor de Toloache is New York's only all-female mariachi band.

Celebrate Brooklyn! brings back the 1931 Bela Lugosi classic Dracula, with Philip Glass's equally classic original score performed live by The Philip Glass Ensemble. Last attempted in 2005, the screening and performance were cut short by rolling thunder, lightning and torrents of rain worthy of Transylvania. This time around, there will be an opening set by the diabolically talented violinist and singer Kishi Bashi, a cohort of Regina Spektor and Of Montreal, "who's creating something haunting, beautiful and maybe a little off-kilter through the technology of looping" (NPR).

The Tiger Lillies, whose wicked cabaret has been likened to "Kurt Weill as scripted by Aleister Crowley" (The Guardian), present a musical conjuring of The Rime of the Ancient Mariner, Samuel Taylor Coleridge's seminal romantic poem of death and enchantment on the high seas, complete with a cleverly projected stage set. The maverick theater artist and musician Cynthia Hopkins will set the mood of briny macabre with an opening set of sea-faring songs and ghost stories.

The enigmatic songwriter Mike Scott, "madman or genius, depending on your point of view" (Record Collector Magazine), has explored many sounds and styles through The Waterboys, his principle vehicle since 1983, but the burning intensity of Celtic folk rock remains at the center. The band will play songs from their latest project, An Appointment with Mr. Yeats, music set to the words of Ireland's greatest lyric poet. Opening the night is fellow Scotsman Alasdair Roberts, a sometime collaborator with Will Oldham, who infuses his songs "with the enduring melodies and lyrical twists of ancient folk music" (The Guardian UK).

Breakout stars The Lone Bellow favor the term "Brooklyn Country" for the liquid smooth harmonies and heartfelt songwriting that have captivated fans and critics alike to make them one of the best bands of 2013. NPR has said of the group, "The world of acoustic music is about to get a new household name." Acclaimed indie Americana outfit The Low Anthem, sporting a reconfigured lineup and new take on their timeless sound, will join them. Opening the evening will be Joe Purdy, Arkansas-born singer-songwriter producer and one-man record label, who creates "gorgeous, beautifully-rendered acoustic-based folk songs" (Pop Matters).

Combining fierce musicianship with intense energy, Trampled By Turtles infuse their "supercharged songs with a hooky playfulness and white-knuckle power" (Esquire). The band drags bluegrass kicking and screaming into the modern world. Helping them on this night is The Devil Makes Three, who traffic in "bluegrass...folk, rockabilly, and Piedmont blues and ragtime, all played with a blazing punk-rock attitude" (SF Weekly). Thomas Paine-quoting Rhode Island duo Brown Bird, who favor a dark and dreamlike take on American roots, start the concert.

The soul singing dance music eclecticist Jamie Lidell is "the progenitor of his own completely original genre that no one else has been able to recreate" (KCRW) and "a master-craftsman of genre hybrids packing potent lyrical punches of love" (Stereogum). Co-headlining is Dan Deacon, the absurdist composer and party instigator from Baltimore, who will wield a participatory smartphone app that turns the crowd into a sound and light show of its own. NPR has said, "If Dan Deacon comes your way, go... It will change your life forever." Opening the night will be psychedelic soul outfit The Stepkids.

Nine-time GRAMMY®-winner Eddie Palmieri, the Spanish Harlem-born granddaddy of salsa and Latin jazz piano, returns to Celebrate Brooklyn! with an orchestra in tow. "This is music so vital and joyous...a totally celebratory sound, bouncing, shuffling, weaving and grooving along on a beat so mesmeric and soul-wrenchingly right that you want it to go on forever" (Time Out London). The multi-lingual tropical grooves of the enchanting Banda Magda begin the evening on a sunny note.

Director and composer Benh Zeitlin teams up with musical collaborators Dan Romer and Wordless Music to perform the world premiere of Zeitlin and Romer's original score to Beasts of the Southern Wild live with a full orchestra, to a new, music-less print of the film that has been created for the occasion. Zeitlin's magical realist fable set outside of New Orleans, "a passionate and unruly explosion of Americana" (The New York Times), was arguably the most celebrated independent film of 2012, winning countless awards and four Oscar nominations, including Best Picture. The evening will start with the fiery Balkan-via-Brooklyn brass funk of Slavic Soul Party.

The day Kingston-born chart-topper Shaggy moved to Flatbush as a teenager, it became his destiny to play Celebrate Brooklyn! He is dancehall's biggest crossover star ever for a reason - his impossibly catchy party anthems are "unabashedly geared toward good times" (MTV). Opening the night is electro hip-hop artist TK Wonder, whose "ability to spit at aggressive tempos is rivaled by few of her contemporaries, and she's got that killer combination of looks and skills that the game is sorely missing" (Washington Post).

Celebrate Brooklyn! welcomes back local originals They Might Be Giants (TMBG), a festival favorite for decades, to close out the 35th anniversary season. The duo released its 16th studio album, Nanobots, earlier this year, a record of "catchy pop heroics mixed with jingle-length songlets" (Rolling Stone) that "makes it clear the band is as creatively vital as ever" (Stereogum). Brass and drum trio Moon Hooch, handpicked by TMBG to open, will get the night started with their "catchy melodic hooks and funky rhythms" (NY Post).