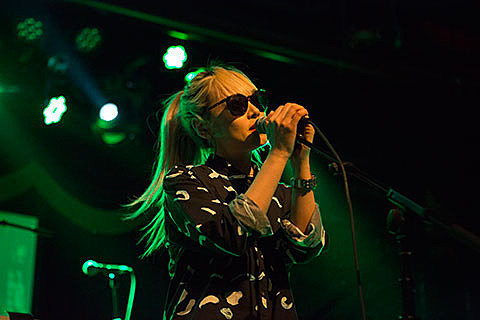 Celebrate Brooklyn, the people behind the ongoing BRIC House shows and the upcoming Prospect Park shows, will be throwing more shows in between, the Celebrate Brooklyn Dance Parties at Brooklyn Bridge Park's Pier 1. There's three shows, all FREE, happening for three consecutive Thursdays in May. Each show features "a varied lineup of bands paired with DJs, on a great lawn with spectacular views of the city, plus dance lessons, free valet bike parking, food trucks" (many with specials based on the show's music genre) and more, and runs from 7 to 10 PM. Entry to the pier is at Old Fulton Street at the Brooklyn waterfront or from the new Squibb Park Bridge.

The first show will be headlined by the Gogol Bordello-related Balkan Beat Box on May 8, and also features DJ Joro Boro. On May 15, it's veteran NYC band Cibo Matto who are fully back in action with Javelin and Le Tigre/MEN's JD Samson. Then, finally on May 22 it's Sierra Leone's Refugee All Stars (who played The Apollo earlier this month) with Okayafrica's Electrafrique w/ Chief Boima & DJ Underdog.

Meanwhile, BRIC is throwing a 'dance party' this Saturday (4/12) at the BRIC House with AndrewAndrew and a DJ set from Neon Indian, whose collaborator Leanne Macomber has a new NSFW video for her Ejecta project. Tickets for Saturday's show are still available. Full upcoming BRIC House schedule here.