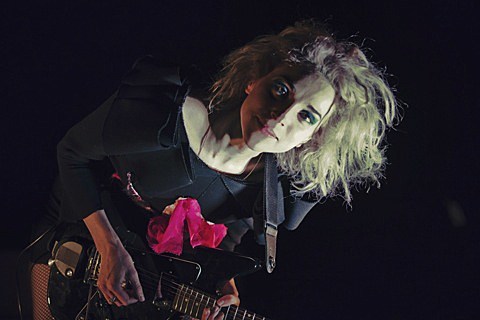 A few of the paid Celebrate Brooklyn! shows at Prospect Park have already been announced, including The National, Neutral Milk Hotel, and Nick Cave and the Bad Seeds, plus the free Janelle Monae show, and now BRIC has announced the full lineup for the 2014 season.

The full lineup is listed below. Some highlights of the FREE shows include:

Warpaint and Yellowbirds on June 26.

Kes the Band and Kuenta I Tambu (KiT) on August 2.

All of the above-mentioned shows are FREE, all ages, and open to the public. Most start at 7 or 7:30 PM. Check out the full Celebrate Brooklyn! schedule below...

(update: note some recent additions/subtractions to the lineup)

Over the course of one EP (Metropolis: Suite 1 (The Chase), 2007) and two critically acclaimed concept albums (The ArchAndroid, 2010 and The Electric Lady, 2013), Janelle Monáe has revealed herself as one of the most original pop voices of her generation: at once futuristic, retro, and totally of the moment. Protégé of Big Boi, signed to Bad Boy, and the founder of her own Wondaland Art Society, she is "a super-musical cross between James Brown, Judy Garland, André 3000 and Steve Jobs, invented to test the desperate incredulity of music journalists" (The Telegraph).

Prior to the concert, BRIC will hold the Celebrate Brooklyn! Opening Night Gala, honoring Kenneth Adams, President & CEO of Empire State Development and Commissioner of the New York State Department of Economic Development, at 5:30 P.M. Gala tickets can be purchased online at www.BRICartsmedia.org/cb or by contacting Kristina Beaudett at 718.683.5633 or kbeaudett@BRICartsmedia.org.

A rousing triple bill that celebrates the many sounds of Louisiana with The Soul Rebels, "the missing link between Public Enemy and Louis Armstrong" (Village Voice), supplying the brass, Jon Cleary, whose R&B combo "is as broad, deep and roiling as the Mississippi river" (Rolling Stone), and Lost Bayou Ramblers coming through with the foot-stomping zydeco.

The pioneering saxophonist and composer Ornette Coleman "expanded the jazz idiom more than anyone except perhaps Louis Armstrong" (All About Jazz), but his influence reaches far beyond jazz. His son Denardo, an outstanding drummer who debuted on record with his father at the age of 10, convenes a deep and surprising lineup of special guests for a long-overdue exploration and celebration of Ornette's music and spirit, with his own band at the core. Special guests include Afrika Bambaataa, Bill Laswell, Bruce Hornsby, Flea, Geri Allen, Henry Threadgill, James Blood Ulmer, Patti Smith and many more. See www.BRICartsmedia.org for lineup updates.

The Grammy-winning, TED-Talking, fiercely political and devotedly multi-cultural L.A. party band Ozomatli brought their "effortless mashup of musical styles" (NPR Music), to families and children in 2012 with the album OzoKids. They head to the Bandshell for Celebrate Brooklyn's annual homage to the trailblazing children's book author and illustrator Ezra Jack Keats, a Brooklyn native who was the first to populate his distinctly urban stories with young people of color. Along with music, the day will feature readings of Keats' work, great food for all ages, and of course the great Park Slope tradition of on-site stroller parking.

The Philly-born singer-songwriter Amos Lee, a "gentle genius" (Billboard) of R&B and country-inflected folk, hit his stride with last year's Mountains of Sorrow, Rivers of Song, a record that "brims with introspection about life and love" (Entertainment Weekly). He follows Lake Street Dive, a captivating indie-pop-swing foursome whose lead singer Rachel Price "has the soulful howl of a young Etta James" (Daily News).

Named in homage to both Iggy Pop and The Vaselines, Dum Dum Girls might be the smartest band ever to put '60s girl group sounds through a garage rock meat grinder. Their first LP, I Will Be, was "a blistering half-hour of menacing, witty bubblegum pop" (Pitchfork), and every release since has been a revelatory combination of deep musical references and pure adrenaline. With on-the-rise Brooklyn acts Hospitality and Teen, both riding high on acclaimed sophomore albums released earlier this year.

Hailed as the greatest hope for the survival of roots reggae, Luciano couples a cosmopolitan style with "soulful, spiritual messages ... that feel pulled straight out of gospel" (The New York Times). The prolific Jamaican overflows with music; he has released 40 records since his 1995 landmark debut, Where There Is Life. The evening begins with a tribute to the beloved community activist Faybiene Miranda led by the powerhouse singer Sandra St. Victor and featuring students from the Ifetayo Cultural Arts Academy, which Miranda ran in Brooklyn until her passing.

An elevated hybrid of jazz, hip-hop, and R&B leaps from the Grammy-winning fingers of the "supple, simmering pianist" (NPR Music). Robert Glasper--a fusion that finds its most potent expression with his exceptional band Robert Glasper Experiment. He comes to the Bandshell with the stalwart Brooklyn MC Talib Kweli on board to add his lyrical prowess to the holiday weekend. The versatile percussionist and composer Glenn Kotche's solo work--on glorious display in Adventureland, released earlier this year--is "as rooted around high-brow concepts as it is in rhythmic dynamicity and melodic bemusement" (Pitchfork). Aja Monet, the youngest ever winner of the New York City's Nuyorican Poets Café Grand Slam Champion title, takes the stage for an opening set.

Directed by author/filmmaker/journalist and longtime Fort Greene resident Nelson George, this special BRIC commission honors the 50th anniversary of the landmark Voting Rights Acts of 1965 with a moving and exciting combination of film, music, and spoken word. This ambitious exploration of American polls yesterday and today celebrates and recognizes the journey we have collectively undertaken towards equality at the voting booth--and the distance we have left to travel. Vote, It Ain't Illegal Yet! will include contributions by Burning Spear, Vernon Reid, Maya Azucena, Roger Guenveur Smith, Carl Hancock Rux, Rosario Dawson, Ramya Ramana and many more. With musical direction by D-Nice. See www.BRICartsmedia.org for lineup updates.

With its signature rack of junk and an endless arsenal of sounds, Alloy Orchestra, "the best in the world at accompanying silent films" (Roger Ebert), returns to Celebrate Brooklyn! with the NYC premiere of its original score to He Who Gets Slapped (1924), the tragic tale of a brilliant scientist who loses his research--and his wife--to a dishonest man and winds up a down-and-out circus clown with a very peculiar act. With an opening set by local Gypsy jazz guitar wizard Stephane Wrembel.

The Chinese-born, NYC-based Shen Wei is internationally renowned for his cross-cultural, boldly visual movement-based works, the 2008 Beijing Olympics opening ceremonies being among his best-known choreographic spectacles. This evening-length program centers on his Rite of Spring, a lushly physical expression of Stravinsky's great score. "Shen Wei's Rite reclaims the ambitious, hopeful modern spirit bubbling at the time Stravinsky and Nijinsky created their 1913 original--that is, unembarrassed to think and aspire to more" (Boston Globe).

Brazilian musical royalty comes to the Bandshell in the form of Bebel Gilberto, "a bewitching figure" (Los Angeles Times) who elegantly celebrates the bossa nova style her father, the legendary guitarist João Gilberto, helped popularize. Vinicius Cantuária, "the doyen of Brazilian singer-songwriters" (The Guardian), is a Bossa Nova icon in his own right whose storied career includes explorations into rock and a long love affair with New York's downtown jazz world. The evening begins with a set of contemporary African folk from the exquisite Zimbabwean singer Netsayi.

Featuring DJ and musician Kid Koala, producer Dan the Automator, and "the King of the Oddball Rappers" (Pitchfork) Del the Funky Homosapian, Deltron 3030 is one of the great alternative hip-hop concept projects of all time, an Afrofuturist extravaganza in the tradition of Sun Ra and George Clinton. The original eponymous record from 2000 and last year's follow up, Event II, recount the outer space adventures of Del's alter ego Deltron Zero in the year 3030. For the live version, an orchestra joins the supergroup. The sprawling Montréal hip-hop collective Nomadic Massive opens the night.

In the seven years since they last performed together, the influential bluegrass outfit Nickel Creek's "deep and specific rapport as a trio has sat untroubled on the shelf, ready to be uncorked at any time" (The New York Times). On the 25th anniversary of the band's formation, Chris Thile, Sara Watkins, and Sean Watkins have obliged their untold hoards of fans with a new album, a tour, and a free show at Celebrate Brooklyn!

Twenty years ago, South Africa's apartheid regime fell. To mark the occasion, Celebrate Brooklyn! presents a rare screening of the Amandla!: A Revolution in Four-Part Harmony (2002), an extraordinary documentary featuring Miriam Makeba, Abdullah Ibrahim, Hugh Masekela and many others. The film examines the role music played in the forging of the modern nation. South African composer Neo Muyanga begins the evening with a set that will include a live performance of his score to William Kentridges's short film Second-hand Reading (2013), performed with live projection.

The return of Dance Theater of Harlem to the world stage after a nine-year hiatus is cause for celebration. The groundbreaking company is here with a program that includes Donald Byrd's Contested Space (2012), Robert Garland's Return (1999) and a sleek and evocative restaging of Frederic Franklin's 1984 masterpiece of classical rigor Pas de Dix by Keith Saunders, Kellye Saunders, and Virginia Johnson. The New Orleans-based cellist and singer Leyla McCalla, whose recent album Vari-Colored Songs pays tribute to the poetry of Langston Hughes, plays an opening set.

Trinidad's Kes, a band of brothers that has taken the soca world by storm with hits like Wotless and Tuesday on the Rocks, brings its "bigger, better, crazier, sexier" (Caribbean Beat) island pop sound to the Bandshell. Kuenta i Tambu (KiT) incites frenzy on the dance floor with a sound that blends the Afro Caribbean party music of its Curuçao heritage with club beats from its Amsterdam home.

Founded in County Donegal nearly three decades ago and "thought by many to be the finest traditional Irish combo working today" (Chicago Weekly), Altan "have managed to cross the all-important cultural barriers between folk and world and rock music" (Dublin's Sunday Tribune). With the singer Maura O'Connell, who delivers stirring renditions of Irish classics with a hint of Nashville twang.

Asian Dub Foundation's trademark fusion of punk, electronic beats, reggae, bhangra, and hip-hop has attracted many famous fans, from Primal Scream to Radiohead, Sinead O'Connor to Chuck D, all former touring partners and studio collaborators. In a special BRIC commission, the iconic London band performs the world premiere of its new original live score to George Lucas' feature directorial debut THX 1138 (1971), a chilling dystopian fantasy set in an Orwellian future where mood-stabilizing drugs are mandatory, sex is prohibited, and a young Robert Duval quietly rages against the system. Before the film, Taylor McFerrin layers vocals, beat boxing, samples, and live instruments in a one-man performance that "builds from his roots deep in '60s soul to his vision of future hip-hop" (Resident Advisor).

Celebrate Brooklyn!'s 36th season concludes with a Festival debut by St. Vincent, whose "bold and almost jarringly confident fourth record, St. Vincent, does not sound like it was recorded here on Earth" (Pitchfork). The free concert begins with the orchestral folk-pop of Brooklyn composer and songwriter Ellis Ludwig-Leone's San Fermin.