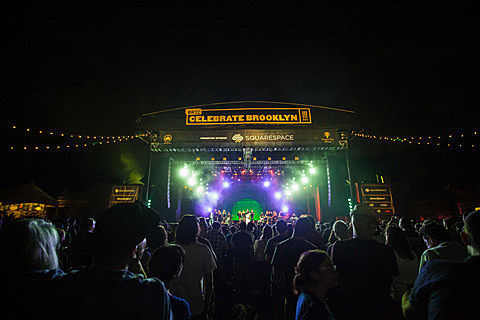 We've known about Celebrate Brooklyn!'s summer slate of 2015 ticketed benefit shows at Prospect Park -- including Modest Mouse, Interpol and Willie Nelson -- for a while and now they've announced their free show schedule. In addition to the already-announced New Pornographers show on 7/11 (which now also includes Thao & the Get Down Stay Down) and the Chaka Khan season kickoff show on 6/3, this summer's free highlights include:

With ten Grammys, ten #1 Billboard hits, 22 albums, and a career spanning 40 years and influencing countless other singers, Chaka Khan truly is the "Queen of Funk." Songs from her time with multiracial trailblazers Rufus and as a solo artist --"Tell Me Something Good," "Ain't Nobody," "I'm Every Woman," and "I Feel for You" to name just a few -- are dance floor staples everywhere. She brings her unbridled talent to the Bandshell to kick off the Festival's 37th season.

Prior to the free concert, BRIC will hold the Celebrate Brooklyn! Opening Night Gala, honoring David Berliner, COO of Forest City Ratner Companies, at 5:30 P.M. Gala tickets, starting at $500, can be purchased online at www.BRICartsmedia.org/cb or by contacting Kristina Beaudett at 718.683.5633 or kbeaudett@BRICartsmedia.org. The proceeds provide vital funds that help keep Celebrate Brooklyn! programming free and accessible to everyone.

The New Orleans accordionist, singer, and educator Terrance Simien, "a Zydeco Master" who "delivers soul worthy of Stax greats" (Rolling Stone), brings a touch of the bayou to the Bandshell for the Festival's annual homage to the trailblazing children's book author and illustrator Ezra Jack Keats, a Brooklyn native who was the first to populate his distinctly urban stories with young people of color. The day will include readings from the author's works by Celebrate Brooklyn! favorite Dan Zanes, complete with video projections.

Barbados' legendary Krosfyah "plays speedy, exhilarating soca," (The New York Times) with irresistible energy. Their long-awaited return to the Bandshell gets an extra punch from Lead Pipe & Saddis, whose smash hit "Ah Feeling" brought them to the finals of the International Groovy Soca Monarch Competition in Trinidad this year. The dynamic Brooklyn-based dance and music troupe Something Positive, "known for its high-octane performances" (Caribbean Life), starts things off with a sunburst of sound and color.

The captivating bassist and singer Esperanza Spalding's "sprawling collage of jazz fusion, Brazilian, and even a touch of hip-hop" (PopMatters) has earned her critical acclaim, universal love, and four GRAMMYs--including Best New Artist in 2011, making her the first ever jazz artist in the category. She brings her latest project of all new material to the Bandshell. The evening begins with fellow free-thinker José James, whose breakout 2013 album No Beginning No End sounded "like the result of the black-pop continuum, jazz and soul and hip-hop and R&B, slow cooked for 50 years" (The New York Times).

Lucius traffics in "seemingly impossible harmonies with flawless grace" and "brings delicate beauty to even the most bombastic moments" (New Yorker). This all-Brooklyn triple bill finds them sharing the stage with the maverick experimentalist Luke Temple of Here We Go Magic and the enchanting indie folk outfit Pavo Pavo.

A double bill of extraordinary collaborations: the GRAMMY-winning "super-musicians" (Los Angeles Times) of eighth blackbird, an impeccable sextet with the energy and audacity of a rock band, team up with revered singer-songwriter Will Oldham (Bonnie 'Prince' Billy) on a program that will include Frederic Rzewski's powerful spoken word piece "Coming Together," as well as arrangements of Oldham's songs, material by Bryce Dessner and other works. The other half features Bill Frisell, who "plays the guitar like Miles Davis played the trumpet" (New Yorker), and folk revivalist Sam Amidon, whose "highly personal approach opens a window on the American past and lets us feel it like nothing else around" (NPR).

The dancers in artistic director Jelon Vieira's DanceBrazil "glow enthusiastically as they let rip at highest energy" (The New York Times), fusing contemporary movement with the dance/martial arts form of capoeira. The program here includes Malungos, which takes its name from a slang word used among enslaved Africans traveling on ships to Brazil, and Gueto, Vieira's testament to the vitality of marginalized communities. Opening the show is Forro in the Dark, a group of expats led by percussionist Mauro Refosco (David Byrne, Red Hot Chili Peppers) who take the tradi­tional party music of northeastern Brazil "to new heights by drawing on influences ranging from Enrique Iglesias to Beck" (NPR).

Last year's Down Where the Spirit Meets the Bone, which Pitchfork called "a career highlight," solidified Lucinda Williams as perhaps America's greatest barroom storyteller--a singer-songwriter of fierce honesty and conviction, articulate and rough in equal measure. Expect a set that careens from stripped down acoustic ballads to rambling electrified country-blues stomps. The powerhouse local singer Jason Walker adds some sublime gospel-infused soul to the mix.

Brooklynite Jennie Livingston introduces a special 25th anniversary screening of her Sundance Grand Jury Prize-winning documentary Paris Is Burning. This intimate and moving portrait of the Harlem drag balls of the 1980s illuminated a world of sustenance and joy that one group of New Yorkers created in the face of racism, poverty, and homophobia. The singer and producer JD Samson, founding member of the electro-feminist-punk project Le Tigre, starts off the night with a celebratory live band set.

The astonishingly inventive pianist and composer Jason Moran unleashes his fun side in this "joyous and foolish and graceful" (The New York Times) event, a spectacle complete with dancers and costumes that takes the stride innovator Fats Waller as a jumping off point to dig into grooves that flirt with everything from Motown to house to hip-hop. For all Moran's skill and showmanship, Butler, Bernstein & The Hot 9 - a dazzling collision between the great New Orleans pianist, singer, and recent Brooklyn trans­plant Henry Butler, "a visionistical down-home cat and a helli­fied piano plunker to boot" (Dr. John), and the retro-futurist trumpeter Steven Bernstein - will be a tough act to follow.

No band embodies the raging bluegrass revival better than Punch Brothers, a virtuosic five-piece fronted by mandolin player Chris Thile, once the movement's enfant terrible and now its champion, that shifts its emphasis effortlessly "from instrumental wizardry to playful storytelling" (The New York Times). Mandolin prodigy Sarah Jarosz, a recent addition to Brooklyn and a veteran at 23, is cut from the same cloth.

The New Pornographers - A.C. Newman, John Collins, Blaine Thurier, Dan Bejar, Kathryn Calder, and Todd Fancey - are a true super group, "virtually peerless in the world of power-pop and indie-rock" (NPR), and last year's Brill Bruisers found them in top form. With the beguiling alt-folk iconoclasts Thao & The Get Down Stay Down.

The heir apparent to the African guitar throne, Vieux Farka Touré - son of the Malian six-string magician Ali Farka Touré - plays "original guitar music of such fluidity, technique, rhythmic invention, and passion, that it is virtually unequaled" (AllMusic). He shares the stage at the Bandshell with countrymen Tamikrest, whose fiery, trance-inducing desert blues make them the spiritual descendants of Tinariwen. DJ Dakar, from Harlem via the Pikine neighborhood in his city of birth, spins.

Alloy Orchestra's latest score enlivens Rudolf Valentino's final outing, The Son of the Sheik (1926), a vivid tale of passion, betrayal, and redemption that leaves no doubt that Valentino (who died suddenly on the eve of its release) is the silver screen's greatest lover, and that Alloy is still "the best in the world at accompanying silent films" (Roger Ebert). Ghost Train Orchestra dig deep into Harlem and Chicago jazz of the 1920s.

With her T-Bone Burnett-produced solo debut, Tomorrow Is My Turn, Rhiannon Giddens - already among the brightest stars of Americana as the leader of the Carolina Chocolate Drops - has hit the stride of her already impressive career. "She can summon the power of a field holler, Celtic quavers, girlish innocence, bluesy sensuality, gospel exaltation or the pain of slavery... For all her technical control, her voice is a perpetually soulful marvel," exclaims The New York Times. The GRAMMY-winning producer Joe Henry, who has worked with the Chocolate Drops, is a singer-songwriter of extraordinary depth, "coupling gloom with streaming daylight and gilding his saddest observations with joy and awe" (NPR).

The Alabama native Jason Isbell has emerged as the great hope of country music. The Wall Street Journal calls him "a composer of splendidly crafted songs" who "performs with an intensity that con­nects the listener to the deep and genuine emotions that inspire his work." The bewitching Louisville-born, Brooklyn-based songwriter Dawn Landes writes and sings "with such weightless delicacy...it's hard not to be transported" (Uncut).

In this mesmerizing world premiere, the masterful NYC-based Orchestra of St. Luke's provides accompaniment to a massive, site specific, multi-screen installation by the artist Clifford Ross, whose work evokes "profound vital­ity and pleasure" (Art in America). St. Luke's, an ensemble marked by "roving curiosity" and "stylistic flexibility" (The New York Times), will perform works by Wojciech Kilar, Bryce Dessner, Vivaldi and John Adams, including selections from "The Four Seasons" and excerpts from "Shaker Loops." Kronos Quar­tet cellist Jeffrey Zeigler teams up with the percussion­ist Andy Akiho and the poet Roger Bonair-Agard on a program of Philip Glass, John Zorn, and Paola Prestini to begin the evening.

Big K.R.I.T.'s space-themed 2014 sophomore effort Cadillactica (Def Jam) "shines like a supernova," according to Billboard, who goes on to call him "one of the most gifted rappers living on this wretched ball of blue called Earth." He'll have to bring his A-game, as the bill also includes the "hyper lyrical" phenomenon Angel Haze who has proven that "she can go toe-to-toe with any young rapper when it comes to flow and punchlines" (Pitchfork). First up is the Brooklyn-born chore­ographer and flexing pioneer Reggie "Regg Roc" Gray's The D.R.E.A.M Ring, a crew of local dancers who recently per­formed a showcase at the Park Avenue Armory that "at first amazes and then glides into the mystical" (The New York Times).

"Fabulousness can come in many forms, and Taylor Mac seems intent on assuming each and every one of them," hails The New York Times. The inimitable Mac, who Time Out New York calls, "one of the most exciting theater artists of our time," presents this supercharged slice of his 24 Decade History of Popular Music, a politically-charged, enormous-of-spirit and outrageously entertaining romp through 100 years of culture as seen through songs that range from Tin Pan Alley to the birth of rock 'n' roll to disco and beyond. Special guests include the Brooklyn United Marching Band, a gaggle of burlesque dancers, and maybe a few surprises. A Taylor Mac show is like nothing you've ever witnessed: "Startlingly unique...a must see for anyone who wants to see a kinder, gentler society" (Huffington Post).

Founded in Tel Aviv by Lee Sher and Saar Harari in 2000 and now based in NYC, LeeSaar is "a gutsy, brainy modern-dance troupe" (The New York Times) with a highly theatrical approach. They'll present a program that includes Grass and Jackals, a work that "transforms the dancers--seven women, clad in gleam­ing black bodysuits--into exotic, fluidly moving creatures, sexual and fierce" (New Yorker), along with a duet by their mentor, the great Israeli choreographer Ohad Naharin, performed by dancers from Batsheva Dance Company.

The Jamaican titans Third World lost their beloved leader William "Bunny Rugs" Clarke last year, but have risen like a phoenix from the ashes. Billboard writes they "seamlessly [fuse] reggae with soul and pop," just as they have for 40 years, as cool, steady and easy as ever. Born near Timbuktu and raised in the Ivory Coast, Awa Sangho, "the Golden Voice of Mali," carries the rich tradition of West African song in her heart and lungs.

The free season closes on a high note with the one-of-a-kind tUnE-yArDs, whose Nikki Nack from last year was packed with "songs that sound like playgrounds full of street kids ricocheting off each other like bumper cars" (Pitchfork). The addition of the "free associative, raw and radical" (Los Angeles Times) experimental hip-hop duo Shabazz Palaces threatens to make this the NYC show of the summer.