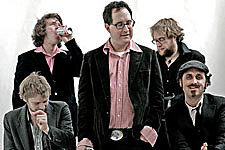 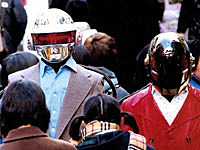 (some) NYC music fans are now faced with an unfortunate decision. Two of the (in my opinion) most exciting big Summer concerts are happening in Brooklyn on the same Thursday August 9th, 2007.

the DAFT PUNK & HOLD STEADY DILEMMA
Should I spend $50 to see what might be the concert of the year at Keyspan Park in Coney Island (Daft Punk, Rapture), or should I save my money and witness what might be one of the most exciting (and free) Hold Steady shows ever? The adopted Brooklyn band (via Minnesota) will be playing under the stars on the outdoor bandshell stage in Prospect Park in Park Slope with The Big Sleep and The Teenage Prayers in front of thousands of Brooklyn fans (I love shows like that - like this - especially if the weather is nice).

Both shows are sure to be memorable. The answer is that "I wish they weren't on the same day", but my real answer is that I'll probably go with Daft Punk for the obvious reason --> (money aside) Daft Punk don't come around every day, and The Hold Steady sort of do. It's doubtful the schedules would work out so there was time to see both - unless The Hold Steady show doesn't actually turn out to be August 9th...then of course maybe it'll rain which would potentially ruin both shows...that would be even worse. Oh, such problems!

The other big indie show at Prospect Park this year is a Canada celebration on June 30th that includes Malajube, The Stills, and Sam Roberts Band. Joan Osborne is playing a show too. All known Prospect Park ('Celebrate Brooklyn') shows listed below, and here.....

(note: this is a preliminary schedule - nothing official yet & more shows and details surely TBA)

The Hold Steady are also playing NYU and Carnegie Hall and elsewhere. The Big Sleep like fireworks.