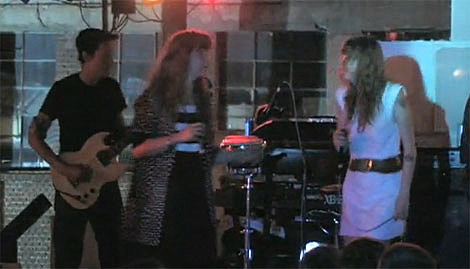 "It was a beautiful Summer night and outside the Metro Gallery in Baltimore Beach House and Celebration played some music for some friends. [The below] video features their performances of a few of the their songs, as well as their collaborative rendition of Michael Jackson's "Billie Jean". August 7th, 2009. Produced by Metro Media in conjunction with the bands."

What a perfect video to post on the eve of the weekend when Celebration, Beach House, AND (the ghost of) Michael Jackson will be in Brooklyn.

As mentioned earlier today, Celebration will be at Market Hotel on Saturday night (8/29) with Future Islands and Sam Mickens' Ecstatic Showband & Revue. What we forgot to mention is that the show is in fact a "A Concert in Loving Observance of Michael Jackson's 51st Birthday" (calling it a "a celebration" probably would have been overkill). Future Islands also play the Impose show earlier the same day.

Then there's the much bigger, and possibly much wetter, Michael Jackson celebration that is going on earlier Saturday in Prospect Park.