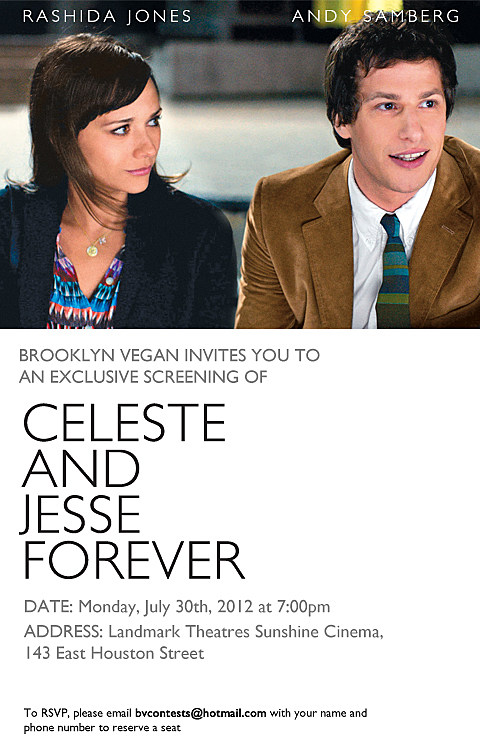 In director Lee Toland Krieger's comedic drama Celeste and Jesse Forever, Celeste (Rashida Jones) and Jesse (Andy Samberg) met in high school, married young and are growing apart. Now thirty, Celeste is the driven owner of her own media consulting firm, while Jesse is once again unemployed and in no particular rush to do anything with his life. Celeste is convinced that divorcing Jesse is the right thing to do--she is on her way up, he is on his way nowhere, and if they do it now instead of later, they can remain supportive friends. Jesse passively accepts this transition into friendship, even though he is still in love with her. As the reality of their separation sets in, Celeste slowly and painfully realizes she has been cavalier about their relationship. While navigating the turbulent changes in their lives and in their hearts, these two learn that in order to truly love someone, you may have to let them go.

As you you might have been able to tell from the flyer above, BrooklynVegan is presenting a free preview screening of Celeste and Jesse Forever on Monday, July 30 at 7PM at Landmark Sunshine Cinema (143 E. Houston St., NYC). To get a pair of screening passes, you need to RSVP to to BVCONTESTS@HOTMAIL.COM with the subject line "Celeste and Jesse Forever." Include your first and last name in the email and your phone number. Your contact info will not be shared with anyone else, and only used to confirm your reservation. BUT, as usual with these sort of things, you need to RSVP, but the screening (capacity 166) is first-come, first-served for those on the RSVP list (aka RSVP does not guarantee entry so arrive early to claim your spot).

The day after our screening, 92YTribeca will show the film as well, with a post-screening Q&A with actors Rashida Jones (who co-wrote the screenplay) and Will McCormack as well as director Lee Toland Krieger. This one's not free ($18) and you can buy tickets here. The film opens at Sunshine Cinema and elsewhere in NYC & LA in limited release on August 3. You can watch the trailer below.