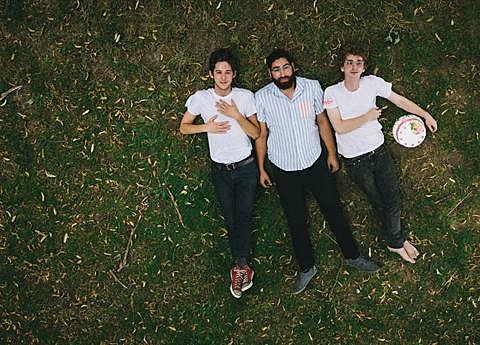 Brooklyn's Celestial Shore released their new album, 10x, last week via Hometapes. "Beachy" is a term that's thrown around a lot with them, and you can hear traces of Brian Wilson in their harmonies, but "Little Deuce Coup" this ain't. The group bring an intricate mathy-ness to the music, with frequent time/tempo changes making the album right at, er, home on Hometapes (All Tiny Creatures, Slaraffenland). You can stream two tracks from the album below and the whole thing via Spotify or Rdio.

Celestial Shore play a record release party tonight (9/13) at Silent Barn. Openers are Empress Of and TEEN (both who could probably headline Silent Barn on their own), plus Bueno. The band have a bunch of upcoming NYC shows, actually. They'll support Darwin Deez and Caged Animals at Knitting Factory on September 29 (tickets); play Grand Victory on October 4 with Feuding Fathers; open for Arto Lindsay as part of the CBGB Fest at Bowery Electric on October 12 (tickets); and play with Luke Temple at Le Poisson Rouge on October 14 (tickets). All dates are listed below.

Empress Of also recently announced shows with the 4AD-signed SOHN.

All Celestial Shore dates are listed, along with song streams, below...