Ceremony at ABC No Rio 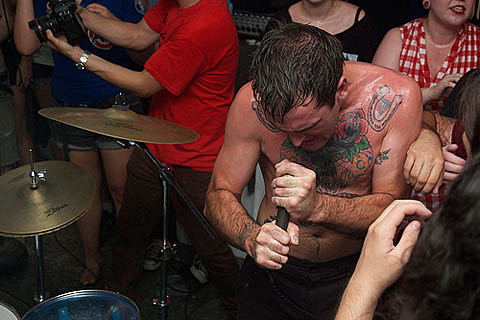 Ceremony and Black Kites played Death by Audio on August 8th. Ceremony also played ABC No Rio one night earlier. The shows were in support of their new LP Rohnert Park, out now on Bridge Nine Records. Punch was scheduled to head out with Ceremony, but were forced to drop off the tour due to the singer breaking her ankle.

Black Kites played their set at DbA in front of the stage, level with the crowd. It was technically their record release show for the new 12", Songs Written While Things Were Changing, released by Protagonist Music. The LP follows the New Jersey three-piece's first release, Advancement to Ruin's from RTF Records (and a split with Brooklyn's Swallowed Up on Hydrogen Man Records).

Singer Jeff Guerriero's desperate vocals command attention and balance with guitarist Tom Schlatter's style (The Assistant, You and I). They tore through a great set- check BlacK kites out again on August 28th at ABC No Rio, where they will kick off a partial US tour with Germany's Zann. And if you want to really be entertained, check out Jeff Guerriero's alter ego as professional wrestler, "Jeff Cannonball," at one of his flamboyant matches as part of National Wrestling Superstars. Seriously, I went to one in February. It was really fun.

Bay Area hardcore band Ceremony made the room explode. Ross Farrar is a great front man, diminishing the distinction between stage and crowd. Drummer Val Saucedo (Punch, Loma Prieta) filled in, speeding up songs that were incredibly fast to begin with. Guitarist Anthony Anzaldo danced and spun around in lace fingerless gloves up to his elbows. The result was a room full of energy; people were on the stage and Farrar off-stage about half the time, as he screamed with a mic cord around his face and shirt over his head. Ceremony is hard, and totally original.

Ceremony will remain touring on the East Coast, playing the Philadelphia fest This Is Hardcore on August 13th. They launch a European tour in October. It might be a while until they're back around here again.

Pics from the ABC No Rio show continue below... 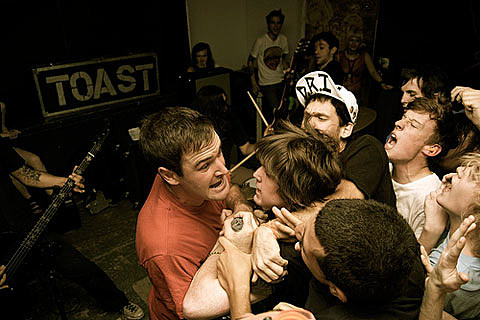 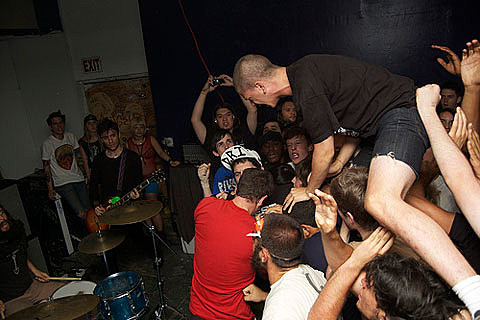 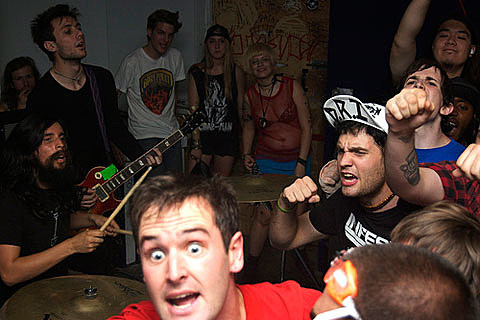 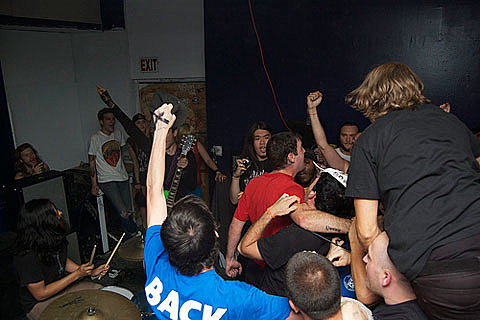 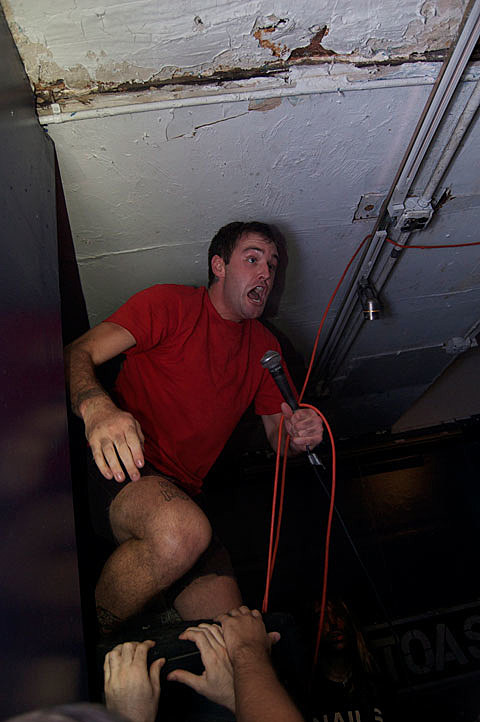 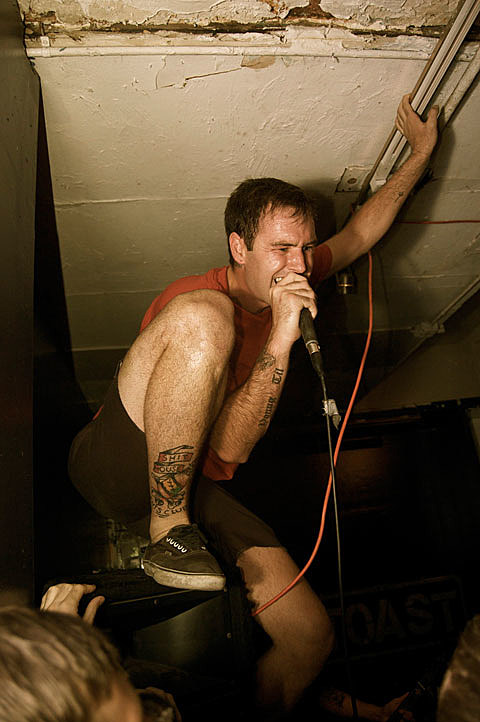 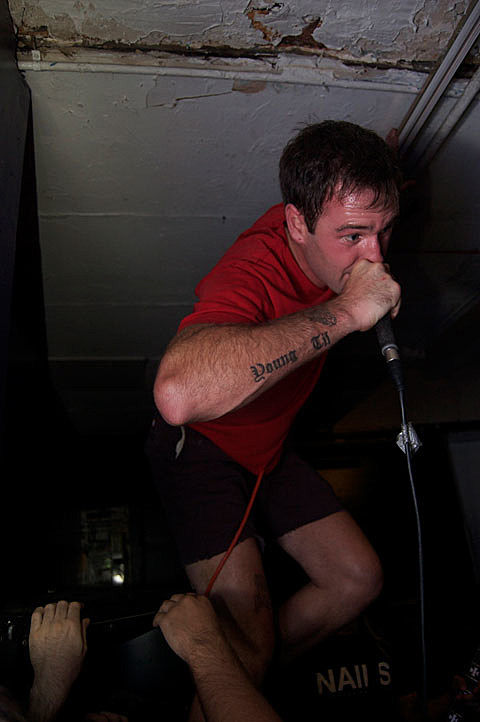 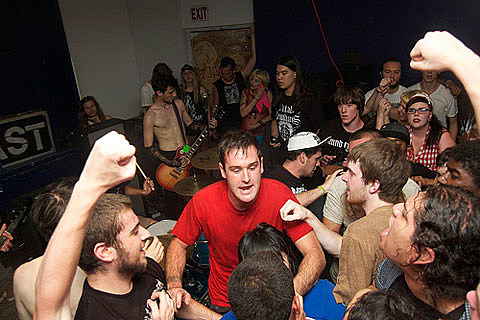 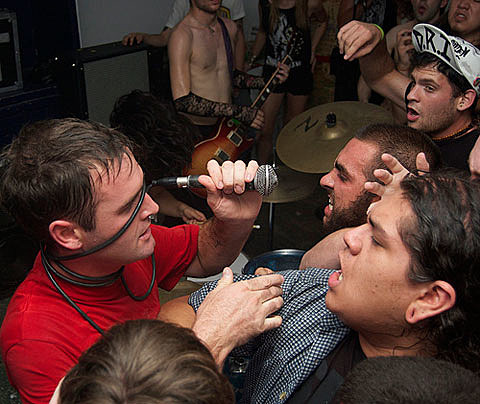 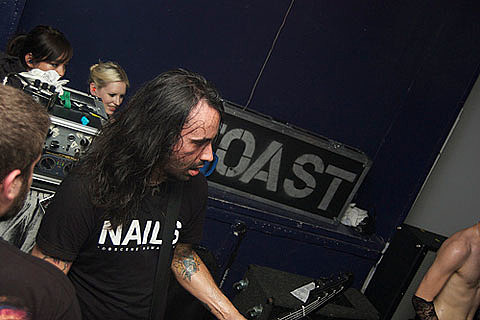 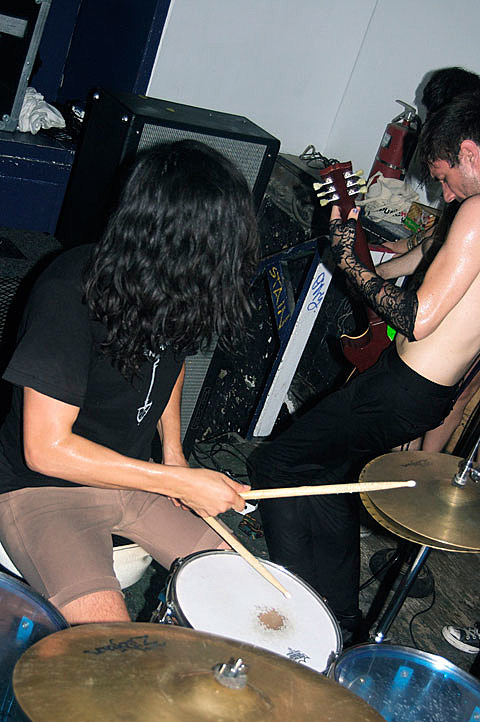 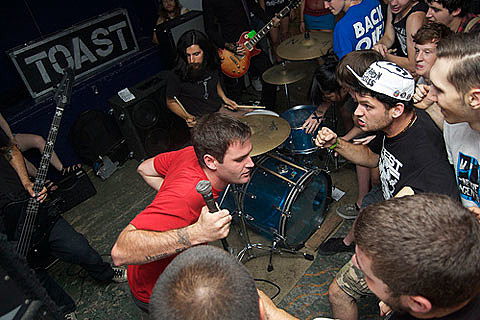 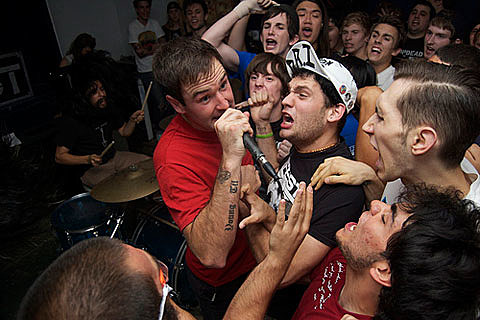 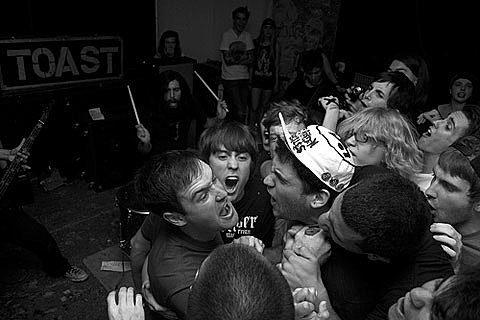 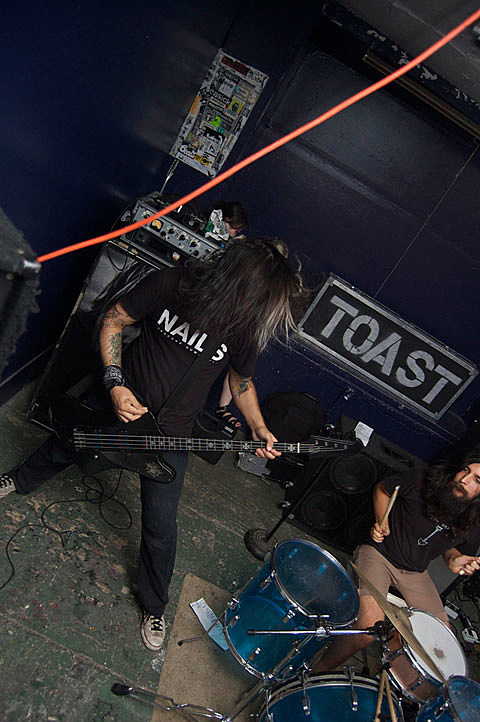 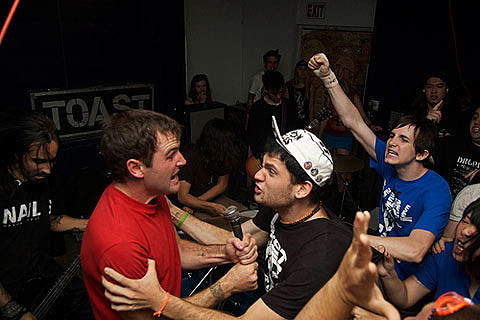 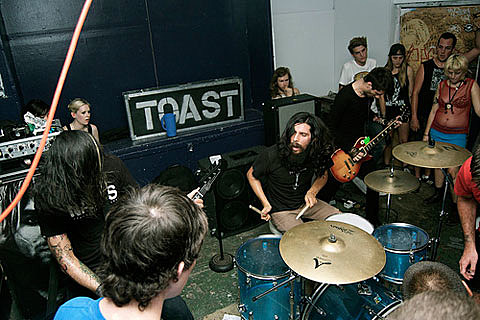 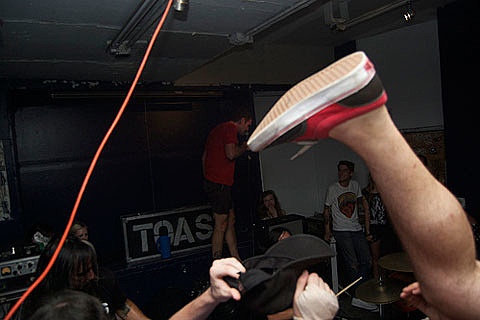 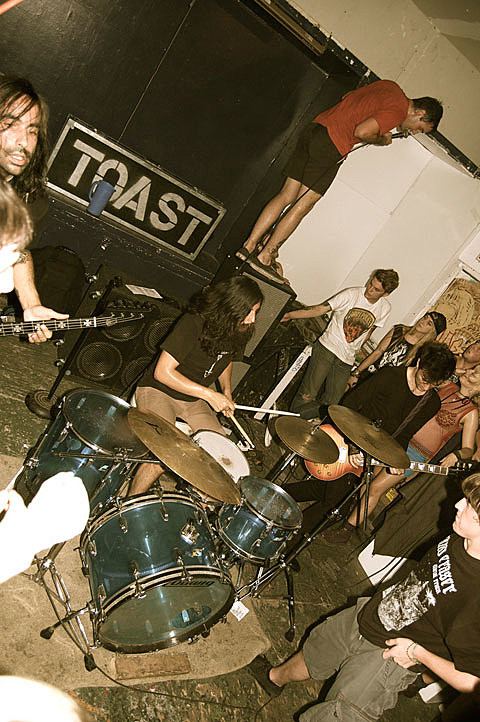 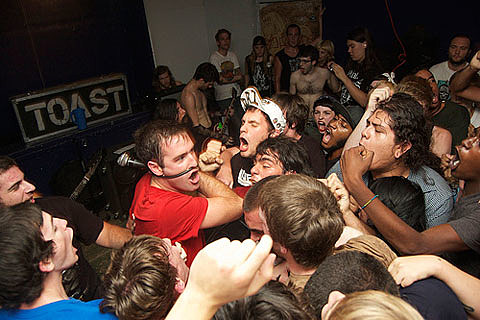 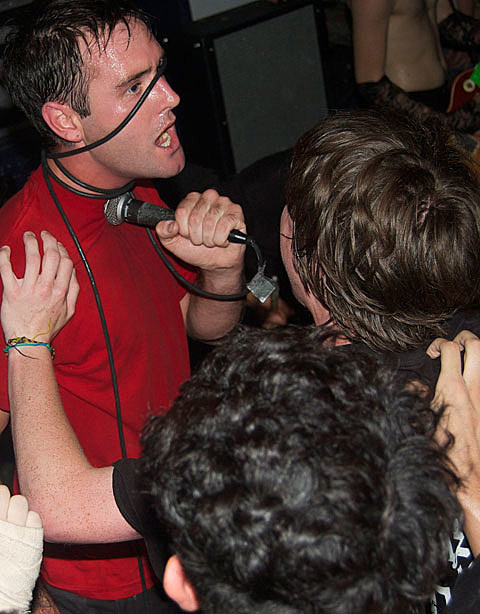 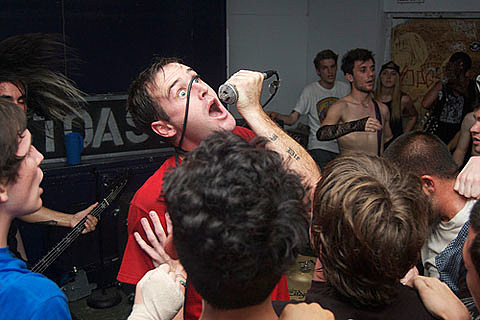 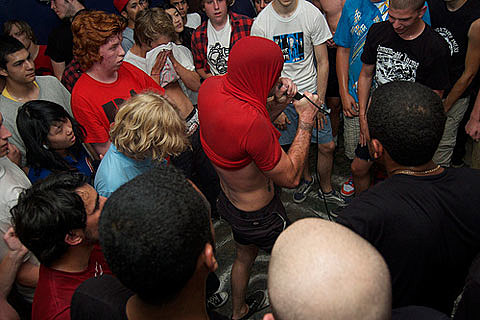 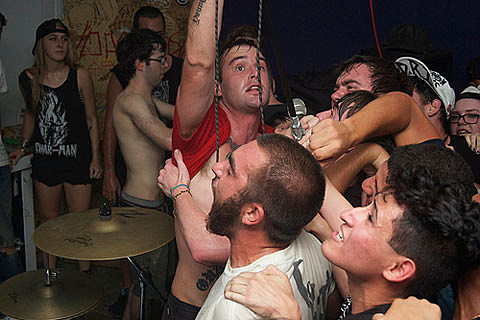 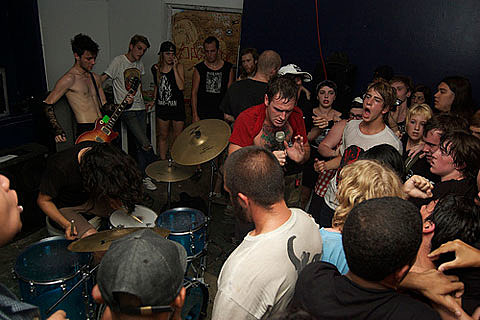 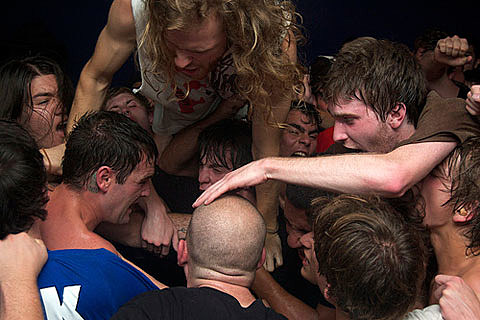 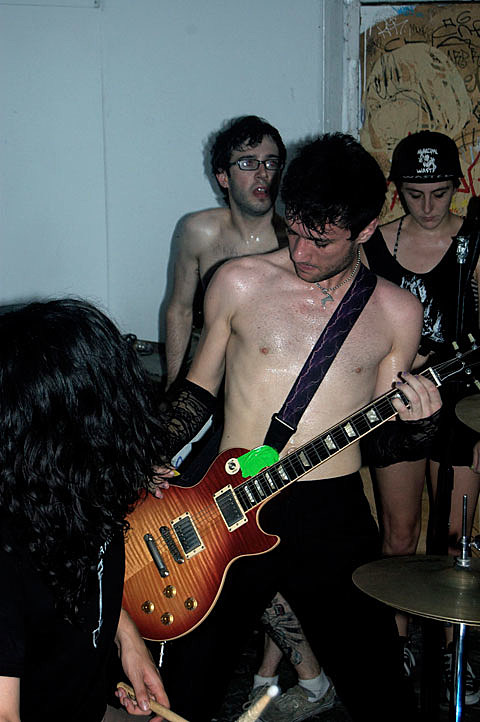 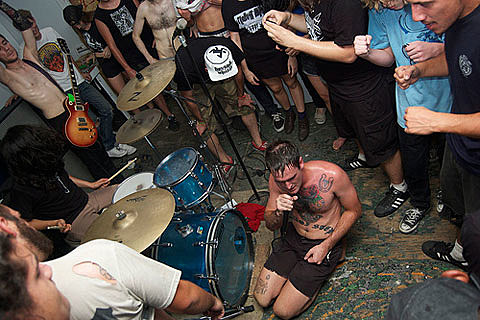