Ceremony at Warsaw in 2012 (more by Joe McCabe) 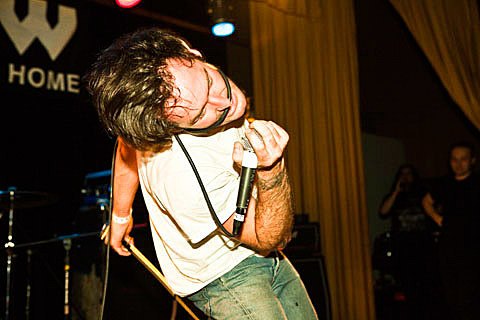 As mentioned, ever-evolving punks Ceremony are set to play this year's This Is Hardcore festival in Philly (they play on 8/10) alongside Kid Dynamite, The Suicide File, Modern Life Is War, Judge, Blacklisted, Tragedy, 7 Seconds, Paint It Black, Code Orange Kids, Nails, Defeater, No Redeeming Social Value, Gwar, and more. Head to TiH's site for tickets. Updated lineup and schedule below.

Around the time of that festival, they'll be doing some other East Coast shows with Baltimore post-punk duo Ed Schrader's Music Beat. Those shows include one in Brooklyn on August 17 at 285 Kent, one in NJ on August 14 at Asbury Lanes, and a little farther out from NYC, they'll also play The El 'n' Gee on August 16 in New London, CT, but it might be worth the drive considering Joyce Manor and Glocca Morra are on that bill too. (It's also a day after Joyce Manor play a free NYC show at House of Vans with Kid Dynamite, Red Hare, and Swearin'). Tickets for the 285 Kent and El 'n' Gee shows go on sale Friday (6/21) at noon, and tickets for the Asbury Lanes show are on sale now.

You can also catch Ed Schrader's Music Beat in NYC even sooner at Death by Audio on June 28 with The Hussy, Barkley's Barnyard Critters (feat. Brian Gibson of Lightning Bolt), and Shark Muffin. Admission for that show is $7 at the door.

Ceremony have a few other coming shows, like one of those free Converse shows in San Francisco, which they'll play on June 27 with Suicidal Tendencies, Rocket from the Crypt, The Bronx, and the Shrine. All dates are listed, along with a few videos, below.

Ceremony - "Throwing Bricks" at This Is Hardcore 2008