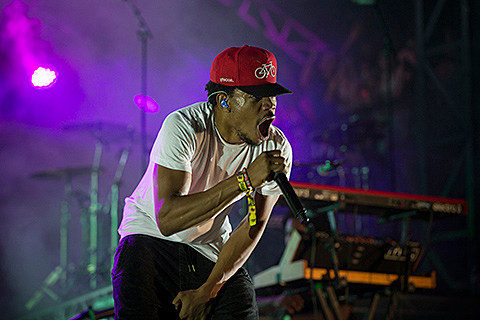 Chance the Rapper got plenty of deserved buzz off of 2013's Acid Rap mixtape, and he's planning to change things up pretty significantly for his next release, Surf, the debut album from his live backing band The Social Experiment, which Chance says is really the brainchild of trumpet player Nico "Donnie Trumpet" Segal. A new FADER story on the album opines, "It's almost as if Chance and his friends are aiming to reverse-engineer the act of beat-digging. Where earlier generations of hip-hop producers foregrounded small fragments of music from the past, The Social Experiment buries new ones for the future." FADER got to hear the album when they interviewed Chance, and their story makes it sound like a dense, complex piece of work. Read more here. Watch the album's new trailer video and stream some recent music Chance and The Social Experiment uploaded to Soundcloud, which may or may not appear in some form on Surf, below.

A new GQ interview with Chance also reveals that Frank Ocean, Andre 3000 and J. Cole will appear on the next Chance the Rapper album, which is separate from Surf, The Social Experiment's album.

Chance doesn't have a tour scheduled at the moment, but he did announce that he and The Social Experiment will come to NYC to play an NYU show on February 24 at Webster Hall with Sweater Beats. Tickets are on sale now, and "all non-NYU purchased tickets must be accompanied by an NYU student with an NYU ID on the day of the event."

Album trailer and song streams below...