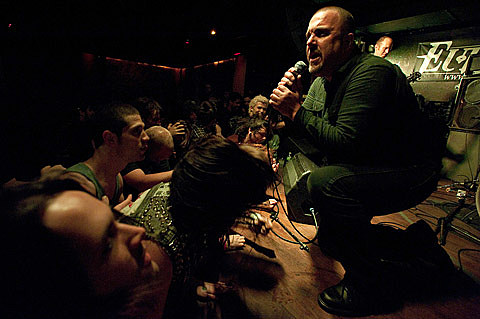 Chaos in Tejas have announced another round of bands for their 2012 shindig (first round here), including rare appearances from legendary post-hardcore band Moss Icon (a one-time only reunion), as well as Japan's Reality Crisis and Skizophrenia (their only US dates), and repeat offenders/favorites like Dropdead, Municipal Waste, Midnight, Ares Kingdom, Puerto Rico Flowers, Xeno & Oaklander, Thou, the Rival Mob, Boston Strangler, Crazy Spirit, Brain Killer, Power Trip, Wiccans (who just played one of the final shows at Emo's), and many many others. A full list of additions and the new flyer is below.

Since the original announcement, two previously announced bands have dropped off the original lineup: Mexican black metal band Nyogthaeblisz disappeared from the lineup after their anti-Islamic/Semitic/Abrahamic stance and involvement in known NSBM (National Socialist) label Satanic Skinhead was pointed out by a few blogs. That led to Antisect and The Mob even threatening to not play. Word then spread that Disma's Craig Pillard released nazi-glorifying records under the name Sturmfuhrer. Disma then dropped out as well due to "the drama" that ensued. Craig would not comment on the matter, but other members of Disma say he has changed.

In related news, Thou will hit the road for a string of dates with The Body this week on the West Coast. Both bands will also be at the inaugural Gilead Media festival (chaired by the Gilead Media label) in Oshkosh, Wi on 4/28 and 4/29 which will feature appearances from (in alphabetical order) Arms Aloft, Aseethe, Ash Borer, Baby Boy, Darger + Plague Mother, False, Fell Voices, Get Rad, Hell, Loss, Mutilation Rites, Northless, Protestant, A Scanner Darkly, and Sleepwalker. More details are available at the site.

All tour dates, new additions to Chaos in Tejas, and the show flyer is all below. 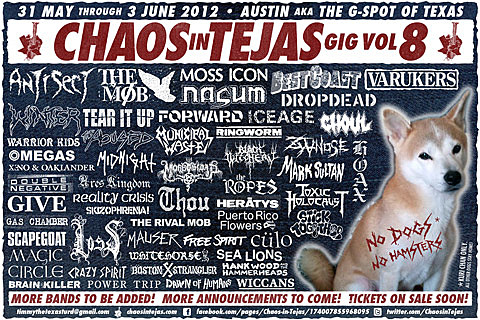