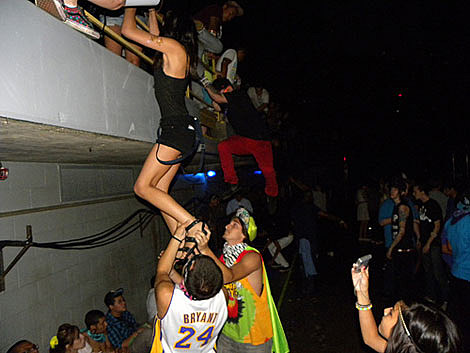 A back door of the VIP section, where tickets began at $125, flew open and fans ran in from the parking lot in what [concert-goer Will] Fan described as a "stampede."

"We saw about 200 kids run right through the bar area," said the 35-year-old Sherman Oaks resident. "It was a little scary. I saw the bartender push one kid down, but everyone else just ran around him. Eventually, security was able to stop more people from coming in. But the kids ran out of the bar...and basically hopped over the balcony and onto the floor. Then the music stopped." 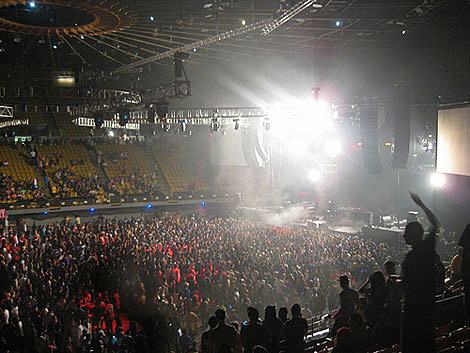 "We were required to shut down Hard Summer at The Forum Saturday [August 8th] night by the Los Angeles County Fire Department. They declared the event a "hazard" after seeing concert-goers jumping from the balcony to the floor. The Inglewood Police Department backed the decision of the Fire Department and assisted in clearing the venue.

While we, the promoters, worked with the authorities to consider other options to continue the concert, ultimately they made the decision to end it. We are happy to report that there were no major injuries.

We are offering refunds to all concert-goers and are deeply disappointed that the fans were not able to see this incredible show come to fruition." [official statement]

Underworld and Chromeo were among those who were supposed to play.

Hard Fest NYC is set to take place October 10th at Terminal 5 where we doubt any problems like that will happen. Crookers and Major Lazer (Soundsystem) headline, and tickets are still on sale.

"This felt like an a unruly high school assembly."

Inglewood police dispatched a riot unit, and by 1:25 a.m. Sunday, more than 17,000 attendees had been sent home.

The Hard-brand dance events are the brainchild of promoter and DJ Gary Richards, who said he's looking at a "seven-figure" loss from the event's cancellation. Full refunds are being offered to ticket holders, and all artists will be paid.

"We were teetering on the edge of thinking things were getting out of control, and then all of a sudden those crashers came in and started leaping from the lower bowl onto the floor," Richards said. "How do you stop 500 people rushing the gate at the same time? You'd need military at that point."

Fire department inspector Frederic Stowers said a number of ambulances were called to the scene, and that the most serious injury was a broken foot. On Sunday, the Inglewood police said four people were arrested for theft and drunk and disorderly conduct, but a statement released on Monday said no arrests were made.

Videos uploaded to YouTube show fans jumping 12 to 15 feet from the balcony. Prija Cash, 27, feared a riot. The Costa Mesa resident was trapped between an underground room with a second stage and the Forum's main floor for about 30 minutes as crashers rushed the gates.

Tickets to the event were general admission, meaning fans weren't assigned a specific seat. The downstairs dance floor was full by 9 p.m., Cash said, leaving fans that came to dance, but wound up confined to balcony seats, frustrated.

"It was advertised as a dance party, and people wanted to dance," he said.

Underworld observed on its website that the mood inside the Forum went from a "good buzz" to an "uneasy" feeling relatively quickly, as fans ignored a barricade to rush the dance floor. The act wrote that it was advised by its security team to leave.

News spread on the Web that Crystal Castles singer Alice Glass suffered a concussion in a melee to get out of the venue, but the act's U.K.-based manager, James Sandom, said via email that while the event was "a disaster," reports of Glass' injury were "not true."

Richards said security had been beefed up for the concert. "The Forum typically hires I think 200 security guards for events," he said. "We had 320 guards. There were 36 Inglewood police officers and nine fire inspectors. My partners had 10 to 15 meetings with those people to go over and over the plan."

The Forum's general manager, Tina Suca, stopped short of saying the venue would avoid dance acts but said "we're a fun rock venue." Another Richards event is booked for Oct. 31, but it will be moved.

"We learned that the Forum is just not the right place for an event like this," Richards said. "Knowing now that people will jump from balconies onto the floor, the Forum is not good for us . . . My brother and I used to manage [metal band] Slipknot back in the day, and those fans weren't doing that."

Groovetickets Sales:
If you purchased your tickets online through Groovetickets.com, a refund for the total face value of your order will be automatically applied to the credit card you used. Please allow up to five business days for the credit to appear on your banking statement.

Retail Stores / Venue Box Office:
If you purchased your tickets through any of the retail stores or from the venue box office, you may obtain a refund by mailing your ticket(s) to:

Please include the mailing address where you would like the refund check mailed to as well as an e-mail address. Include the payee's full name for check payment or full credit card information. Please allow up to 30 days for your refund to be processed.