Amebix, in a rare moment of calm? (more by Justina Villanueva) 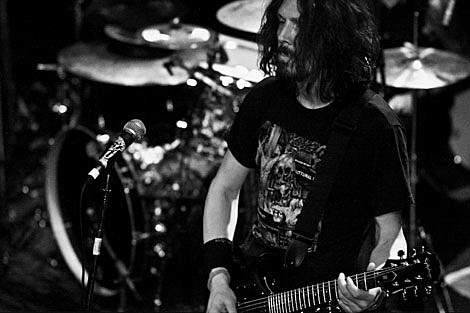 Chaos in Tejas 2009 is on and poppin', having laid out May 21st-24th in Austin for a crust/punk/hardcore field day(s)... dig on the sick FINALIZED lineup that includes punk favorites like Amebix, Cock Sparrer, and Cro-Mags, as well as Eyehategod, The Thermals, Harvey Milk, Annihilation Time, Outlaw Order, Crude, Severed Head of State, Warcry, Ponytail, Trash Talk... the killer list goes on: 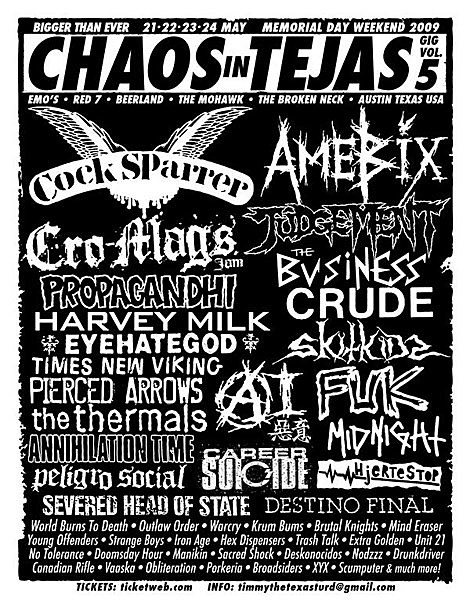 Friday After Party on the Bridge FREE! (all age's)
CAREER SUICIDE

Sunday at Red 7(inside) FREE! (all age's)
SCUMPUTER

There's a THREE DAY PASS for the Emo gigs- Save a little $$$$ with the pass versus buying individual tickets:

Checkout the flyer above. Quite a few of those bands will be also skipping around the US before/after the Chaos In Tejas...

Crude have also lined up some additional US dates with Unit 21 while the band is in the US, including TWO NYC shows (TBA) on May 8th & 9th. Details are forthcoming, check out a live Crude video below.

Amebix have tour dates in the "Mid West and Canada to be announced soon" in conjunction with their Chaos in Tejas appearance. The only other date on the calendar for the reunited crust heroes is June 19th-21st at Hellfest in France.

Sacred Shock (mems Hatred Surge) are hitting the road with Deskonocidos in the months following the Chaos, including two NYC dates: Apr 6 at The Charleston with VAASKA & In Disgust and Apr 7 at Death By Audio with Drunkdriver and Teenage Night War. Meanwhile, look for Hatred Surge to play SXSW on March 18th as part of the Texas Hardcore showcase at Red 7 with Iron Age, On My Side, Your Mistake, Born To Lose, Bitter End, Mammoth Grinder, and The Jonbenet.

Another band on the Chaos in Tejas bill, Mind Eraser, will team up with Sex/Vid for a few east coast dates including a doubleheader on June 6th, Cake Shop (early) & Death By Audio (night). Furthermore, Mind Eraser is reporting that a band from the Texas Hardcore showcase, Iron Age, is on board for those dates.... more details to come. Mind Eraser released The Prodigal Son Brings Death earlier this year, has been repressed and is available at RevHQ. Iron Age has a new record on the way, The Sleeping Eye, and is streaming parts of that record at their myspace. In addition, Iron Age have dropped a promo video for the record, check it out below.

Warcry, featuring members of His Hero Is Gone, Tragedy, Hellshock) are also on the road leading up to/following Chaos In Tejas, teaming up with Japan's A.I. for their first US tour. Warcry/AI dates are below.

Both Annihilation Time & Trash Talk will join Young Widows, Garotas Suecas, The Bronx, & Psychedelic Horseshit for the Brooklyn Vegan Day Party on March 18th at Emo's. Trash Talk announced the release of a new seven-inch, East Of Eden, which is due on pre-order soon.