The Wrens @ Sasquatch Festival on 5/24 (more by Chris Graham) 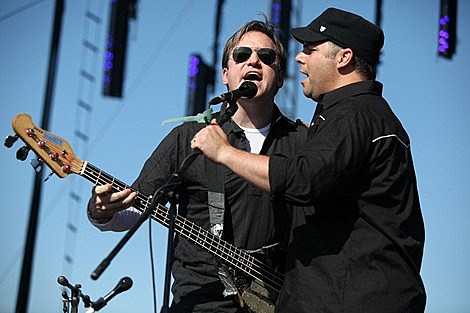 In the fall of 2008, after a comprehensive proposal process with New York City, Neighbors Allied for Good Growth (NAG) and The People's Firehouse, Inc. (PFI), were awarded the rights to re-develop the former Engine Company 212 firehouse. Located at 134 Wythe Avenue, in the Northside section of Williamsburg, Brooklyn, the firehouse will now become home to both NAG and The People's Firehouse. Both organizations have historically served with dedicated action and activism while continually shaping North Brooklyn to benefit the diverse and vibrant community.

The newly redesigned building will become the Northside Town Hall Community and Cultural Center, and so much more...

Charles Bissell of the Wrens, They Might Be Giants and Nada Surf (acoustic) will all turn out for "Raise the Roof," a benefit for the NTHCCC (as it will forever be known) at the Music Hall of Williamsburg on Wednesday, October 28th. Tickets go on sale Friday, August 21st at noon.

This show is in addition to the shows They Might Be Giants have coming up at the Museum of Natural History and NYU.

At the end of July, the Wrens celebrated (or "noted with a website post") their 20th anniversary as a band. The full story on that, with a link to the commemorative t-shirt they made, is below...

Sorry, by pundit law you just have to use that one if you're in a band that makes it to twenty. Ditto if you're still at it when you're sixty-four, so look for more big news from us in four or five years.
Besides, if we'd written the song, it'd have been more like "it was 20 years ago today, that time, a cruel task-hole if ever there was one, taught the band to play". Covers mostly.

But yeah, according to our best guesses, Kev's Tawny-Kitaen-A-Day planner, and a hurried but to-scale rebuild of Stonehenge, we're able to verify with almost penpoint accuracy that it was exactly twenty years ago today, July 31st 1989, that we played our first show as a band. Sweet holy crap.

Sure, there were a few rehearsals before that and sure, we weren't called the wrens then, and sure, it was performed on the then-popular lutes with sackbut accompaniment, but it was our first show nonetheless. And it probably sucked.

If you've ever perused our bio, (a light bullet-point read with an update pending since 2002), you might think this was the show opening for the Fixx, the very reason for our formation, the very fire within the smithy that forged our band...or whatever.

But actually this was a warm-up for that show, at a club called [edit: no one remembers] on 42nd b/n 8th & 9th, south side of the street, right next to the Port Authority bus terminal, which would seem to put it square on the ground floor of that hottie of art moderne, the McGraw-Hill Building (although in hindsight, that seems weird).(photo by Kevin, taken on his way to work yesterday. You're never far from your past when you're a wren and live or work in New York. Also note the artistic happenstance of the pedestrian contrasting the 'walk' symbol. Nice).

the fabric of our lives
To better commemorate so auspicious an occasion in light, wearable cottons, we've commissioned ourselves to make a new t-shirt, this one emblazoned with our simple credo, 'the wrens...keeping folks waiting since 1989', and it's available in our corner store.

As always, these are lovingly fabricated by the in-house guild of unskilled labor you call 'the band', and upon order, carefully & promptly parceled to clothe your waiting thorax.

Even the Progress Report isn't done:
Today being the big two-oh, it seems like a good time to summarize where we're at with new muzak, the next album, our lives etc. All kinda the same thing, really. But with this one already running typically too long, we'll post a separate update by the end of the weekyear, babies willing, as our Wrens' Annual Report to Shareholders.

Relatedly, the quickest of shouts out to Schubas, the club in Chicago where we played last weekend as part of their own ongoing '20th year at it' anniversary. Nice work and nice folks all around.

Happy birthday to us and to you, thanks as always,