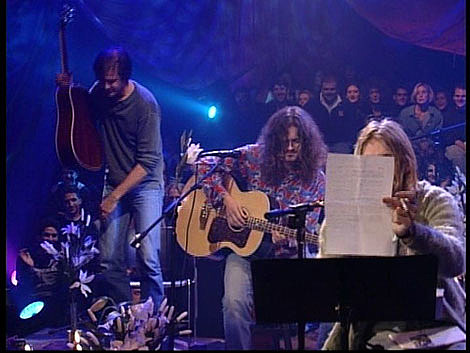 "Oh Me by the Meat Puppets - In late 1993, when Nirvana played their famous "MTV Unplugged" show, they were on tour with Curt and Chris Kirkwood, the brothers who made up the heart of the Meat Puppets. At this point, Cobain was using pretty heavily, and barely made it through soundcheck. During the taping, the Meat Puppets joined Nirvana for three songs, all Meat Puppets originals.

Each band gave a gift to the other that night: Nirvana, by bringing an influential but essentially underground band up to play with them; the Meat Puppets by basically surrendering those wonderful songs to Nirvana, specifically to Cobain. Obviously, having those songs on Nirvana's "MTV Unplugged" album provided the Meat Puppets with some pretty fair publishing royalties (Allah be praised!). At the same time, thanks to that legendary concert, those songs become Nirvana's -- specifically they are associated with Kurt Cobain and that performance. That's got to be an honor for the Meat Puppets. But who knows, maybe it also stings.

I say this only because the originals are so good; indeed, my own preference is for them, especially the fully electric version of "Oh Me," with its fuzz and building distortion and feedback. Curt Kirkwood's soloing is so haunting and sad on this, growing until the sound is profoundly huge. It's a song that deserves to be heard, especially during a season that is supposed to be about giving."
[Charles Bock's holiday playlist of non-holiday treats]

Hear it live, maybe, TONIGHT (December 11th) @ Maxwell's in Hoboken. Or try again Friday in Philly, or at the show Saturday (12/13) night in Brooklyn at Music Hall of Williamsburg. Oakley Hall opens both NYC dates. "Oh Me" videos, and all Meat Puppets dates, below...