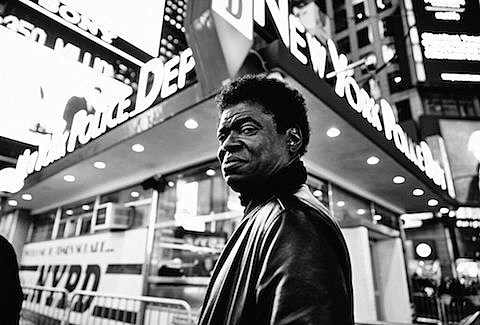 Charles Bradley will release his third album, Changes, on April 1, 2016 via Daptone imprint Dunham Records. The title comes from his killer cover of Black Sabbath's "Changes" that he's been doing live for some time. The song turned up as a 2013 Record Store Day single and will now be the centerpiece of this new album. The video for the song was directed by Eric Feigenbaum who originally intended to have Bradley lip-synch to the song in Times Square but "kept coming back to the take of Charles looking straight at the camera, telling the story with his eyes and reacting in the moment to the song. We only did that once. By the end of the take, everybody in the room was holding back tears." It's undoubtably powerful and the video makes its premiere in this post. Watch it below.

You may have seen Charles Bradley play with Dinosaur Jr. on Saturday (12/5) at Bowery Ballroom where he covered Neil Young's "Heart of Gold." He's got a couple East Coast shows around New Years, including Port Chester's Capitol Theatre on December 30 where he's opening for Trombone Shorty. Tickets for that show are on sale now. He's got dates in Europe next year, too, and all are listed below.

In related news, Sharon Jones & the Dap Kings were on CONAN last night (12/7) promoting their new holiday album. You can watch them perform "Just Another Christmas Song" and the web exclusive "Please Come Home For Christmas" below.