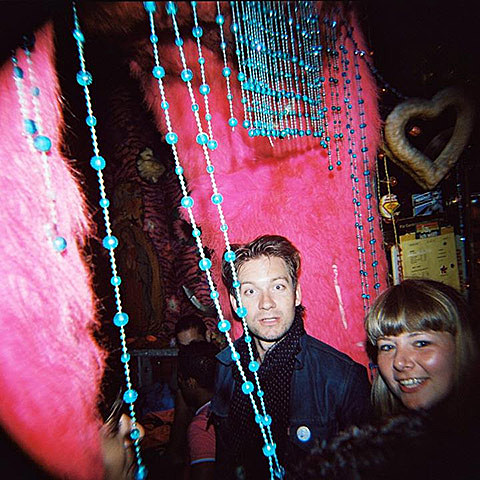 Last year a very close friend of mine committed suicide. GRAFFITI DOGS (KU KU) was written and recorded in the days that followed his gruesome exit. There is no concept or theme around this cassette only that I was touching upon the feelings that emerged; Sadness, adoration, remorse, and even disgust. For several agonizing weeks I lived in a hypersensitive haze. Several of these songs contain snippets or entire poems that were written specifically for a book Chachi, Brandon Welchez and I were in the middle of designing. It was going to be another triumphant installment in our DIY chapbook collection; perverted odes to love's lascivious nature. The book was to be titled "Funny Cunts." Personally, I feel like the sounds and ideas on GRAFFITI DOGS (KU KU) have taken seven years to come to fruition. This tape was written solely for the purpose of helping me cope with my close friend's death. His spirit lives on. I am certain.

Charles Rowell, one half of Crocodiles, will release his solo debut via Art Fag on February 18 under the name Wartime. (Not to be confused with Henry Rollins' short-lived early-'90s hip hop side project.) Graffiti Dogs (Ku Ku) is out now digitally and will be out on cassette soon. Musically, it's doesn't stray too far from the reverby garage that Crocodiles are known for, but the title track is a little more in the soul/R&B vein. We've got the premiere of that song in this post and you can stream it below...