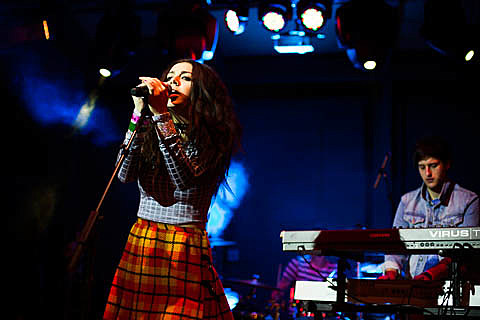 BACK FROM SXSW. IT WAS CRAAYYYYZEEE. I did 10 shows, performed I Love It on stage with Icona Pop for the first time EVER, danced on stage with Ms Mr at the St Lucia show, watched Haim and completely lost my mind because they were so awesome, rode around a lake for an hour on a peddle boat in the shape of a swan, ate dinner with Semi Precious Weapons and Kitten, ate loads of tacos, met some of the Asap mob, saw my baby girl Brooke Candy, lost my boyfriends passport... then found it again... AND SO MUCH MORE. Literally the best week everrrr! Pictures and videos to come soon... XXX

Charli XCX, who sounds like she she had fun in Austin last week, will release her official debut album, True Romance, on April 16. She's also going on tour with Marina & the Diamonds which will stop in NYC on May 29 for a show at Central Park Summerstage (tickets). While here, Charli will play a headlining show at Glasslands on May 31 and tickets for that one are on sale now.

All Charli XCX dates are listed below...