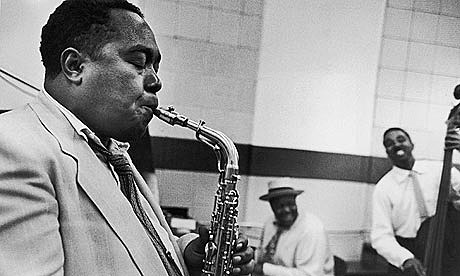 Like an edition of PS1's Warm Up, and the DMB Caravan, the Irene-cancelled Charlie Parker Jazz Festival has been rescheduled, though now it's only one day...

Due to Hurricane Irene, City Parks Foundation was forced to postpone the Charlie Parker Jazz Festival which was originally scheduled for Saturday, August 27 and Sunday, August 28. We are proud to announce a new date for the festival, Friday, September 23, from 6-10 pm at the Richard Rodgers Amphitheater in Harlem's Marcus Garvey Park. Due to the rescheduling of this event, the lineup has been altered and the typically two-day festival has been consolidated to just one day.

This FREE performances is certain to fill up quickly, so get there early: the show begins at 6:00pm.

Watch James Carter play the saxophone in a video below...