Cheap Girls in Chicago on RSD (photo by Zach Pollack) 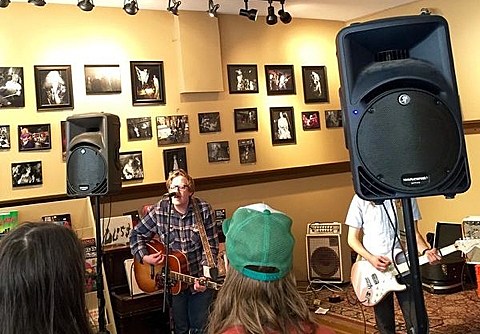 Michigan power pop trio Cheap Girls, who just celebrated Record Store Day in Chicago with an acoustic in-store at Saki (photo above), have a few shows happening after frontman Ian Graham's upcoming solo tour of Canada. Two of those are in their home state of Michigan, but first they play a free show in NYC.

The NYC show happens June 5 at Brooklyn Night Bazaar with Young Statues and Soda Bomb. All dates are listed below.

UPDATE: Now that Brooklyn Night Bazaar will no longer be hosting shows, the show was moved to the bookers' new free show spot, the Riis Park Beach Bazaar, and it's now Sunday afternoon, June 7 instead of Friday night, June 5. Young and Heartless were also added. Cheap Girls will also return to NYC in July for Gigawatts fest.

You can also catch Soda Bomb in NYC sooner, when they play the Studio at Webster Hall (5/15) stop of the BrooklynVegan-presented Superheaven / Diamond Youth / Rozwell Kid tour. Tickets for that show are still available.

Cheap Girls' most recent album was last year's Famous Graves. Watch a video for that, with the tour dates and videos from the other two bands on the Brooklyn show, below...