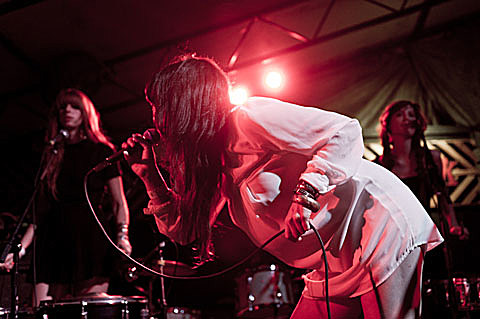 Feathers are making the trip from Austin with former Voxtrot singer Ramesh to play Mercury Lounge on March 5. The band have been making waves in Texas over the last few months and this will be their first NYC show, and their only scheduled show at the moment outside of SXSW.

Feathers is the new project from Anastasia Dimou who you may know from NYC band Cruel Black Dove (who are now broken up). Galexy from Ringo Deathstarr is also in the band. Band member Destiny Montague was in Shock Cinema and Midnight Masses too.

At this point, Feathers only have a couple tracks to check out -- you can stream them at the bottom of this post -- but "Land of the Innocent" is a good one, all pulsing synths and siren-song harmonies. Comparisons will be made to Austra and Zola Jesus, but Feathers are a little more dancefloor oriented, with some glammy stompers in their repertoire as well. The other track is a remix of the song "Dream Song" (which has no released regular version yet). The remix was done by Maya Postepski of Austra and Trust (who just signed to Arts & Crafts).

While waiting to hear more -- or see them live -- check out photos from our man in Austin, Tim Griffin, from their first-ever show back in October when they opened for Washed Out, and from a show they played not long after that at Beauty Bar, AND from last week's 'Free Week' show as well.