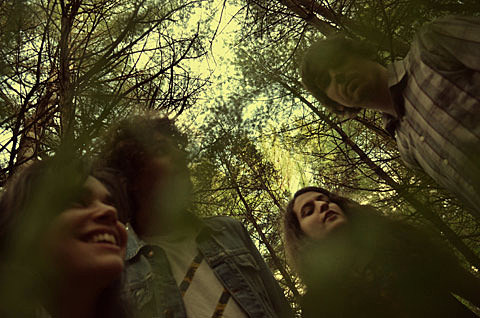 Caged Animals, the new project from Soft Black front man Vin Cacchione, will release their debut album, Eat Their Own, on Sept 27 via Lucky Number. You can download the album's first single, "Teflon Heart," at the top of this post. You can also go see them play live this week: Thursday (8/25) at Union Pool with Life Sized Maps and Shark? and then on September 1 at Shea Stadium with Dive and Forest Fire (whose 2nd album is coming out soon on FatCat).

Where Soft Black (who are still together if you were wondering) are a straight up guitar band, Caged Animals began as a home recording project for Cacchione, using ancient drum machines and keyboards...and modern technology too. The resulting album is minimal and joyous, with Cacchione's melodic abilities as a songwriter fully intact. Despite the understated production, "Teflon Heart" is a pretty soaring pop song with a chorus that could get lodged in your head for a while.

Live, Caged Animals are a quartet, including violinist Magali Charron, and Vin's sister Talya which should flesh out things a bit. Also check out non-LP single "Girls on Medication" from earlier this year at the top of this post and watch its video below.