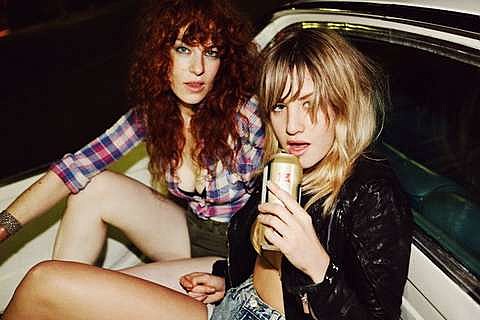 "Bad. Ass." Those are the only two words you'll see written on LA duo Deap Vally's facebook about page, sitting under a picture of the band's two members (Lindsey Troy and Julie Edwards) in a car with just enough skin covered to stay SFW. Usually I'm pretty skeptical about a band's own description of themselves, but in this case nothing else could sound more accurate. Lindsey and Julie play like the White Stripes if instead of Jack and Meg it was Karen O and Alison Mosshart. And though they're bursting with White Blood Cells and a Fever to Tell, there hasn't really been a band with this much raw power since those albums were released. While Jack White's off playing in an exponentially larger band and Karen O is off hanging with everyone from Santigold to Swans, Deap Vally are in that stage that hasn't been as fashionable in recent years - stripping everything down and rocking the fuck out.

Julie Edwards has sat behind the kit in the comparatively less heavy The Pity Party since 2005 and has also lent her talents to The Raveonettes, before deciding to go all out in Deap Vally. Though the band's edge is relentlessly adolescent, on "Gonna Make My Own Money," when Lindsey Troy howls about how she married a rich man, she sounds seasoned and experienced in the way we've come to expect our blues storytellers. On "Baby I Call Hell" she growls "Baby do you love me like you say you do?" from the pit of her stomach like a young Janis Joplin. On the apocalyptic "End Of The World," she begs, "Come on take a breath now," sounding as if that's an actual option in such a situation, before breaking into Iommi-esque guitar bends and exclaiming, "It's the end of the world!" You can stream those tracks and check out some videos below.

Deap Vally have a few dates scheduled at the moment, and they'll be here for CMJ. But they'll head to the NYC area a bit before that to play Maxwell's on October 15. Tickets for the Maxwell's show are on sale now.

A list of all currently known dates, streams, and videos below.

Deap Vally - Baby I Call Hell from Welcome To The West on Vimeo.

Deap Vally - "End of the World"