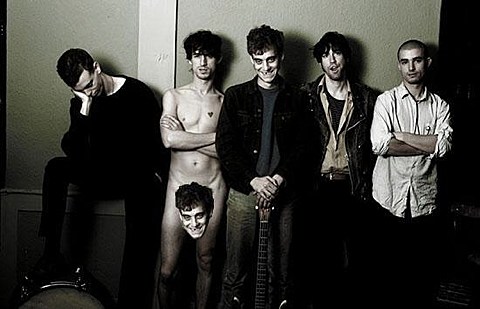 London's Fat White Family released their debut album, Champagne Holocaust, back in 2013 via Trashmouth Records. It's a solid album that echoes multiple generations of psychedelic rock, at times sounding like the '60s US psych-garage rock bands or Syd Barrett Pink Floyd, the Brian Jonestown Massacre/Spiritualized-era revival of the '90s, and recent torchbearers like Ty Segall. (You may remember it from The Quietus' Best of 2013 list.) And they tend to stick to the creepy, evil side of this style; don't think you're getting any flower power here. It's great stuff, especially if you're a fan of this kind of thing.

More recently, Fat White Family have contributed three tracks to a split with Taman Shud that came out this past December, and it sounds like they're only getting better. The split opens with the 7-minute colossus, "Wet Hot Beef (Part I)," a song bigger and bolder than anything on Champagne Holocaust. It builds slow, led by a hypnotic sludge bassline that's soon met by Eastern-tinged guitar scribblings and swelling, wordless harmonies that Brian Wilson could have conceived on a bad acid trip. Lyrics (some of which are just "wet hot beef" repeated) finally do enter as the song continues to trudge forward, piling on the noise and drone. That track is then followed by the much shorter "Wet Hot Beef (Part II)," a dose of psychedelic cowpunk that sounds like a classic Meat Puppets instrumental. They change it up completely again on their third and final song, "Now That I'm Taking Myself Seriously As An Artist (Wet Hot Beef Part III)," which ditches the elaborate instrumentation of the last two for a somber, guitar/vocal dirge. If the "Wet Hot Beef" trilogy is any clue as to where these guys are headed next, we're definitely listening.

Fat White Family will be in the US soon for SXSW. Stream the split with Taman Shud and Champagne Holocaust, along with some videos, below...