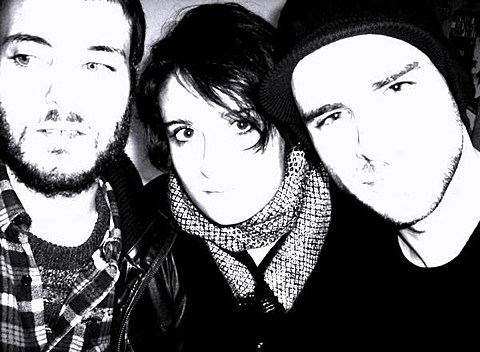 I've been listening to the stream of Sub Pop 1000, the forthcoming compilation from the label which drops Saturday (4/20), and after already being excited for the tracks from Peaking Lights, Iron Lung, Starred, Ed Schrader's Music Beat, and My Disco, one new discovery I've made it on that I keep going back to is Italy's His Electro Blue Voice, whose track, "Kidult," opens the compilation. The track opens as this doomy noise rocker, but a couple minutes in it evolves into a total post-punk attack, and keeps building on layers of psychedelia and noise. It's an excellent track, and you can listen to it, along with the rest of the compilation, at Pitchfork.

HEBV's contribution to the sampler is their first time working with Sub Pop, but they have a past single and an EP on Sacred Bones. Their most recent release (not including SP1000) is 2011's Dead Sons 12", a 3-track release which clocks in at just over 20 minutes. You can stream that one in full below.

Sub Pop 1000, which we recommended in our Record Store Day 2013 guide, is an official RSD release, but it's not an exclusive. It will also be available while supplies last at the Sub Pop webstore and at Sub Pop's Silver Jubilee festival on July 13 in Seattle. Limited to 5,000 copies.