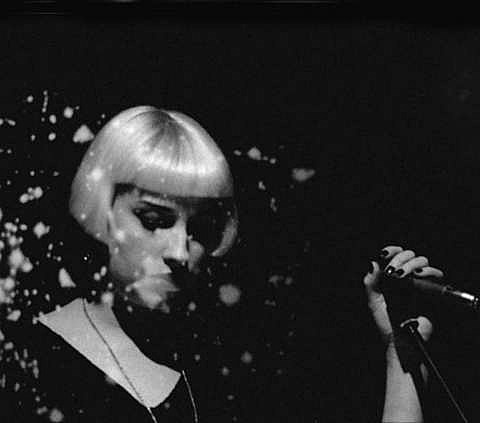 You may recognize Berlin-via-Stockholm songstress Molly Nilsson from her vocalse on "Hey Moon" off John Maus' 2011 LP, We Must Become the Pitiless Censors of Ourselves. But what you might not have realized, is that "Hey Moon" actually appeared on an album called These Things Take Time, which Molly put out in 2008, and other than the addition of John Maus' vocals, not much is different on the version that appears on his album. Check out Molly's original version below.

Molly Nilsson put her own, severely overlooked LP out in 2011 called History. Like These Things Take Time, and all of Molly's other releases, the album came out on her own Dark Skies Association label. One listen to History, and it's no surprise why John Maus wanted to work with her. She's got masterfully crafted synths and drum machines, and a commanding new wave baritone that looks to the '80s for its cues and grounds them in the lo-fi tendencies of modern day bedroom pop. And though the overall mood is dark and subdued, Molly's voice soars. Tracks like "In Real Life," "City of Atlantis" and "I Hope You Die" are immediate hits, and she throws some slow burners in as well, like "Hiroshima Street" and "The Clocks." Some streams and a video from the album are below. Fans of Zola Jesus and Austra should definitely take note.

Molly has plans for a fall tour of the US and Canada which haven't been announced in full yet, but we do know that she'll be in NYC for a show on October 28 at Glasslands. Tickets for that show are on sale now.

All currently known dates are listed below, along with those song streams and some live videos...