Channy with Gayngs at Stubbs in March (more by Timothy Griffin) 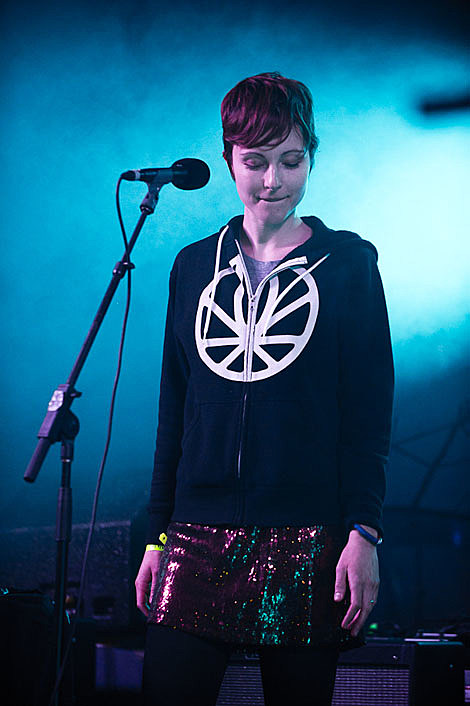 Polica (pronounced po-lisa), the new project of Channy Casselle (formerly of Roma Di Luna and currently the lead female vocalist of Gayngs) are set to release their debut LP this year. The album was co-written and produced by fellow Gayngs member Ryan Olson (also of Marijuana Deathsquads), mixed by Jim Eno (of Spoon), and features guest vocals by Mike Noyce of Bon Iver on two songs. The album's got a sort of electro-R&B influenced indie rock feel and Channy belts out some incredible melodies which are aided by pretty tasteful voice manipulation. You can hear two tracks from the album at Polica's website now, including "Lay Your Cards Out," which features Mike Noyce. The album's tracklist is below.

Polica recently kicked off a short run of East Coast dates opening for Clap Your Hands Say Yeah on their tour which includes the sold out Bowery Ballroom show tonight (9/20). If you've got tickets, get there early to check out Polica's set.

If you weren't able to get tickets for tonight's show, you can catch Polica in NYC again at the last night of Gayngs member Ryan Olson's other group Marijuana Deathsquads' residency at Bowery Electric with Har Mar Superstar in October (tickets).

Polica tracklist and dates below...