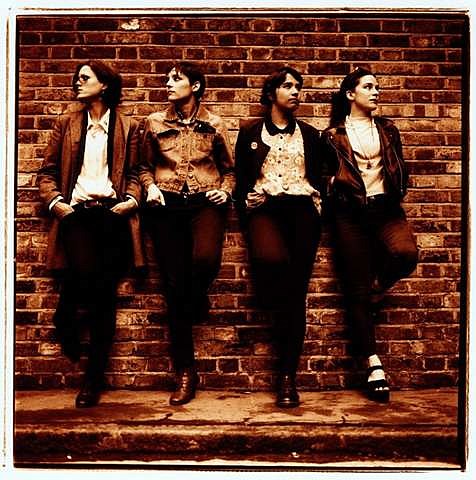 You've been playing live for a while without releasing any recorded material. Why?

Gemma Thompson: We knew from the first rehearsals that we wanted the live performance to be integral, and that everything would come together because of the physical impact. We felt like nothing was finished until our first show. Even if the songs were kind of finished in a sense, they weren't finished until they were performed. [Pitchfork]

UK post-punk band Savages don't claim to be original. In an email (via The Guardian), guitarist Gemma Thompson explained, "I have been listening to a lot of Wire and My Bloody Valentine... I don't want you to get the impression I think of this as a 'new sound' or anything pretentious." So if you think the stammering repetition of "Husbands" in the song of the same name sounds like Patti Smith yelling "Horses" or if their song, "Flying to Berlin" sounds like Echo and the Bunnymen's "Over the Wall," you shouldn't let it bother you, because what this band do care about is far more important than that.

The "physical impact" that Gemma talks about in the Pitchfork interview quoted above is evidenced fiercely in a high quality video of their first show that's been making its rounds on the internet since February (watch it below). They dress in all black, singer Jehnny Beth (aka Camille Berthomier) throws herself at her mic stand, and the band play with the piercing energy that granted the inclusion of the word punk in post-punk to begin with. And Jehnny's lyrics fit the package perfectly. In that same Pitchfork interview, she described them, saying, "I like twisted, original desires. To twist that thing is very important, because it's the existence of life."

In addition to Jehnny and Gemma, the lineup includes bassist Ayse Hassan and drummer Faye Milton. The four-piece came together late last year, their first show was in London this past January, and in June they released their first 7" on Jehnny's Pop Noire label, which she runs with John of her former band, John & Jehn. Now the band are set to make their way over to our shores, and will be in NYC for CMJ this October. The exact shows that they'll be playing haven't been announced yet, but stay tuned for more details.

A list of all currently scheduled dates, song streams, and that live video are below.