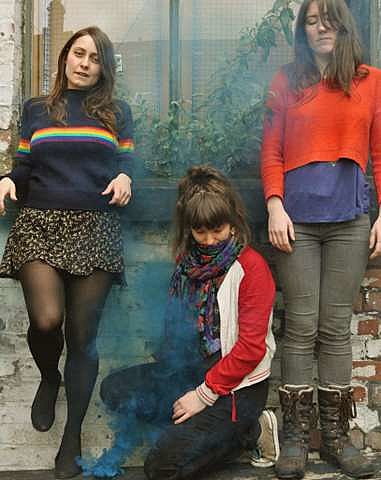 Liverpool residents Rebecca Hawley (vocals, keyboards), Emily Lansley (vocals, guitar) and Lucy Mercer (vocals, drums) formed Stealing Sheep about three three years ago and have an interesting mix of influences: late '60s faery folk, icy Krautrock, the occasional tribal rhythms and just enough AM pop melodies (and effervescent harmonies) to give their songs a partly-cloudy feel that echoes the weather in their hometown.

Stealing Sheep released the Noah and the Paper Moon mini-LP last year and are set to release their terrific debut album, Into the Diamond Sun, on September 4 via Heavenly/ Cooperative Music. They've released two singles from it already, the witchy "Shut Eye" and the poppier "Genevieve" which you can watch the videos for below.

No word on U.S. shows yet but we've got their current UK/European dates listed below.