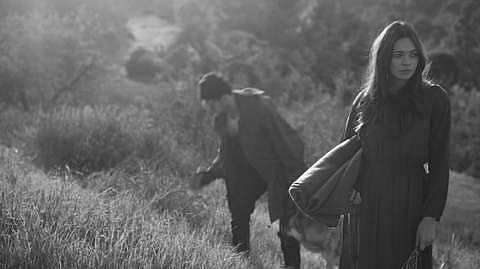 Despite their name, Tashaki Miyaki are not Japanese. The Los Angeles duo's moniker comes from misremembering the name of filmmaker Takashi Miike, creator of such wince-inducing classics as Audition and Ichi the Killer. The band's music, though, is nowhere near as in-your-face as their name's inspiration. They've been called the "female Jesus & The Mary Chain" more than once, but a closer musical antecedent would be the Los Angeles' Paisley Underground scene of the mid-'80s and specifically the laid back, blissed-out vibes of David Roback's many bands (Rain Parade, Opal, Rainy Day, Mazzy Star).

After gaining attention from a cover of The Everly Brothers "All I Have to Do is Dream," Tashaki Miyaki released an EP of originals late last year, from which a pair of gorgeous black and white videos were made. (Watch them below.) A few other singles have been released since -- including a couple more Everly Brothers covers -- and the band will release "Best Friend" on August 6 via Luv Luv Luv Records. You can watch the video (another B&W stunner) below.

Also on August 6, Tashaki Miyaki will play a record release party at Glasslands, their first NYC show. It's with Dirty Dishes and tickets are on sale. The band's other upcoming shows at the moment are in the UK, Canada and their hometown of LA.

All Tashaki Miyaki tour dates are listed below, plus a variety of video and streams to check out as well.