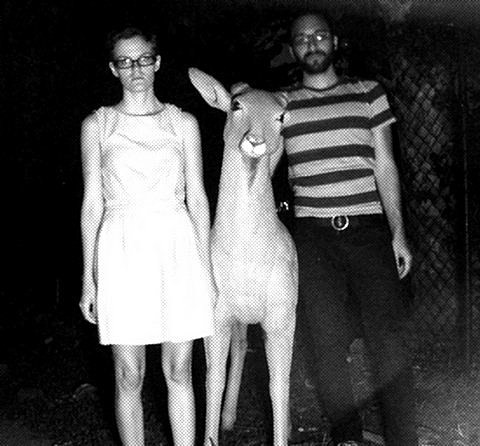 As we hit the heart of winter in New York, the sunny climes of Florida sound pretty good right now. As does some of the music coming out of there, even if on the dark and moody side like West Palm Beach's The Band in Heaven. The group's debut 7" was just released on HoZac: four hits of fuzzy psych rock of varying prescriptions, from the driving lead track "Sleazy Dreams" to the tabla/sitar-fueled "If You Only Knew."

The EP ends with a methadone rework of "Sleazy Dreams" called "Sludgy Dreams" for which the band have just released a trippy music video, animated with cutouts a la Terry Gilliam. We're premiering said video and you can watch it at the bottom of this post, along with a stream of the entire HoZac EP. 2012 should be a busy one for these Floridians, with a second 7" due on Sympathy for the Record Industry later this year.

The Band in Heaven will also be headed to Austin for SXSW, where they'll play showcases/parties for HoZac, Austin Psych Fest, Cherry Sustainable, Get Bent and others. Look for details -- as well as more tour dates -- as March approaches.

In related HoZac news, Radar Eyes' long-gestating debut album is out February 7. Those in Chicago should hit the FREE record release show on February 6.

Check out The Band in Heaven's "Sludgy Dreams" video below, as well as audio streams and cover art to the Hozac 7".

The Band in Heaven - Sludgy Dreams

The Band In Heaven - If You Only Knew by HOZAC RECORDS