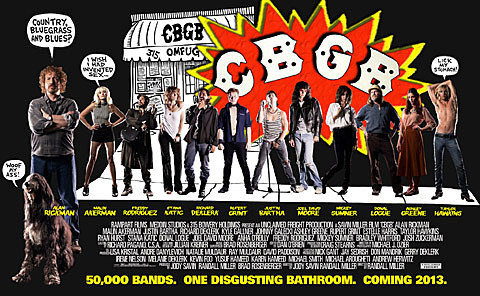 Prepare yourself, the previously discussed CBGB movie is a reailty and on the way. No distributor or release date yet, but there is a poster, which is above. It's a little hard to see shrunk down here but there's a much bigger version over at the movie's Facebook page.

The film stars Alan Rickman (you know, Hans Gruber from Die Hard) as CB's owner Hilly Kristal, which is a check in the "could be good" category... but then there's Foo Fighters drummer Taylor Hawkins as Iggy Pop, Malin Ackerman as Debbie Harry, and, um, Rupert Grint (aka Ron Weasley) as Rocket From the Tombs' Cheetah Chrome. Donal Logue, Johnny Galecki and Bradley Whitford are also in this thing. If the poster is any indication, it'll be a wacky comedy?