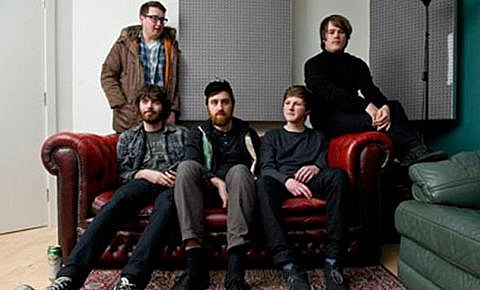 One of the remixes on GOAT's "Run to Your Mama" #RSD13 12" is Hookworms which is not some producer/DJ but a five-piece band from Leeds, UK. The band formed two years ago or so and practice a visceral blend of noise, drone, motorik rhythms and impassioned vocals that basically demands to be listened to at top volume. (At times they're not unlike Chicago's Disappears.) The band have shared UK stages with Wooden Shjips, Sun Araw and Peaking Lights and, after a few small batch releases, have just released their proper debut album, Pear Mystic. You can stream a track below, and the whole album is also on Spotify.

Additionally, Hookworms will release a new 7" via Too Pure's Single of the Month club. The A-side, "Radio Tokyo," is a real corker and you can stream it below too. No word on an American release or any tour dates over here, but all upcoming Hookworms dates are listed below.