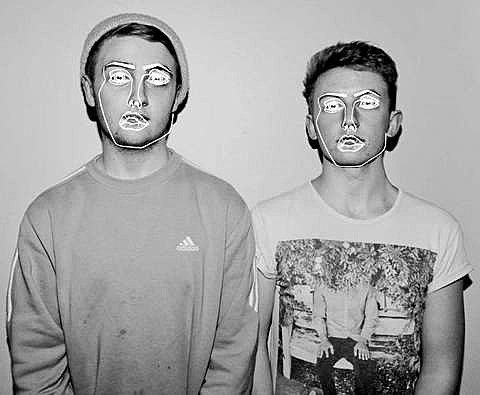 UK bass duo Disclosure (aka brothers Guy and Howard Lawrence) released their debut EP, The Face, earlier this year via Greco-Roman. It's four tracks long, two of which have guest lead singers -- Sinhead Harnett on "Boiling" and Ria Ritchie on "Control" -- and should be of interest to fans of last year's guest vocalist-filled SBTRKT album, who Disclosure has joined on stage in Nottingham (video below). SBTRKT also featured them in a a mix he made last year. They've also remixed SBTRKT collaborator Jessie Ware's track "Running," (listen below) off her upcoming debut LP and performed it live with her last month in London at Hackney Weekend (but the video has since been removed).

Though the SBTRKT and Jessie Ware comparisons are good reference points for the duo's sound, it's not totally fair to tie them down to it. There's a really familiar feeling to the EP, perhaps due in part to the fact that it was released about a year after this sound really began taking off, but it's not without its own twist. It's certainly got a bit more hop in its step than the vocal-fronted ambient garage of Jamie Woon or James Blake, but it doesn't totally sound like Disclosure will be headlining Terminal 5 any time soon either (where SBTRKT's just-announced tour will hit in October). And though lead vocals tend to make songs like these more memorable, the most distinctive track is "What's In Your Head," which is lead by a sampled voice repeating the song's title and some looping moans. You can stream the entire EP below, and check out the video for "Control." Disclosure also have a FACT mix and a Mixmag DJ lab mix which you can stream below.

Disclosure will be heading out on a North American tour this October, which kicks off with two NYC shows that happen on October 24 at Glasslands and October 25 at Mercury Lounge. Tickets for the Glasslands show go on sale Friday (7/27) at 7 AM and tickets for the Mercury Lounge show go on sale Friday (7/27) at noon. Before the North American tour, they'll go on a European run supporting Hot Chip, whose member Joe Goddard remixed Disclosure's track, "Control," and co-owns the Greco-Roman label they're on.

A stream of that remix, a list of all dates, the tour flier, and all other streams and videos are below...