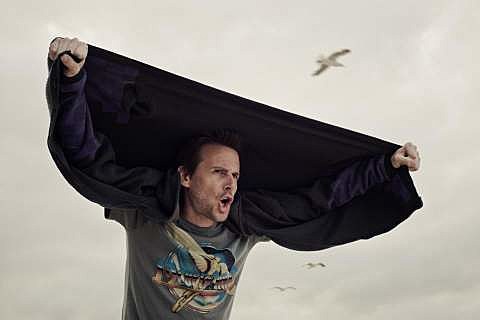 UK producer/musician Chris Clark aka Clark released his new album, Iradelphic, last month via Warp. The album features the immediate standout track, "Secret," which owes a bit of its immediacy to featured vocalist Martina Topley-Bird, who has also contributed her vocals to Tricky, Massive Attack, and others. But the album benefits from its instrumental work as well. The three part trek, "The Pining," is a great piece which combines beats and live guitar (played by Clark) in a manner that brings to mind Rounds-era Four Tet.

The album includes other tracks that interwork live instrumentation and electronics, and in between those it works in jazz-piano interludes ("Black Stone"), ambient passages ("Broken Kite Footage"), and another track with Martina Topley-Bird ("Open"). You can stream the tracks, "Secret," "The Pining pt2," and "Com Touch," below.

Clark has a North American mini tour planned for next month which includes shows in Montreal (Mutek), LA, Chicago, and NYC. The NYC show is a live set happening on June 10 at Le Poisson Rouge. Tickets are on sale now.