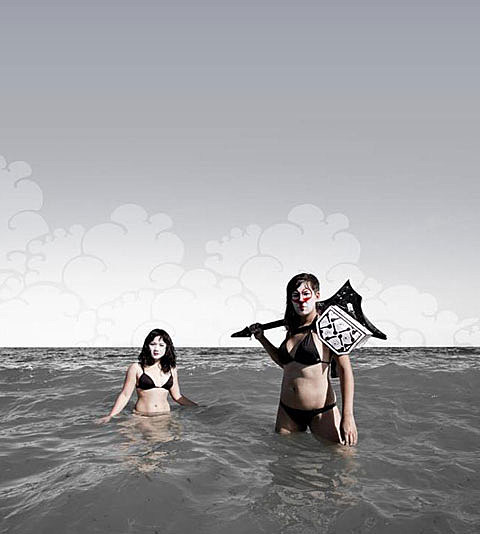 Canadian duo Yamantaka // Sonic Titan (aka Alaska B and Ruby Kato Attwood) wrapped up 2011 with a self titled album that's been picking up more and more speed into the new year. The band combines progressive rock, psychedelia, sludge metal, noise, and a handful other genres, coming out with an undeniably eclectic sound. Both members are of Asian ethnicity and are practicing Buddhists, which they openly express as having influenced their sound. Redefine Mag are fans, but are a bit cynical about it saying, there is a degree of intense Asian fetishism present in YT//ST's schtick that translates to their image in an arguably trite way." Meanwhile, Now writes that "Yamantaka//Sonic Titan purposely position themselves at the nebulous centre of multiple dialogues about identity politics, culture, genre, discipline and even what it means to be a band," and Pitchfork calls them "stoner-rock imaginings of Chinese opera." The Grid says that the band explores "Asian, Indigenous and diasporic identities, riffing on and sending up stereotypes while crafting their own unique and utterly compelling ways of telling stories."

The band's desire to fusion Eastern and Western cultures does bring to mind Japanese bands Boris and Boredoms, and if either of those bands had Lizzi Bougatsos of Gang Gang Dance singing, it probably wouldn't sound too far off from YT//ST. Their Pitchfork interview also mentions that their band name references a Buddhist deity and a Sleep song, and that their self-penned genre, "Noh-wave" is a reference to the Japanese musical drama form Noh, and obviously, No Wave.

Referencing that many things from across the globe, history, and a wide musical palette and putting it all into one cohesive album (which clocks in just over 30 minutes with 7 songs) sounds great on paper. But if you're wondering if Yamantaka // Sonic Titan can actually accomplish it, stream the entire album at their bandcamp. It's as weird as it is catchy, as heavy as it is soft, and as modern as it is nostalgic. Also check out the video for album track "Hoshi Neko" below.

Their live shows, which include tons of theatrics like face paint, masks, costumes, and visuals, feature other members in addition to Ruby Kato Attwood and Alaska B. Their facebook credits Ange Loft, John Ancheta, Brendan Swanson, Alana Ruth, and Walter Scott. Note that three of the members include "art" as one of their "instruments" and that they also have members to handle lighting, stage, and costume.

You can catch them at one of their upcoming dates which include the Jeff Mangum-curated ATP Minehead UK in March and a run of US dates with Xiu XIu on their upcoming tour. Yamantaka // Sonic Titan don't play at Xiu Xiu's Bowery Ballroom show (5/4) (Dirty Beaches does) but they'll play their own NYC show just after the tour ends. That show happens at Mercury Lounge on June 13. Tickets go on sale Friday (3/9) at noon with an AmEx presale starting Wednesday (3/7) at noon.