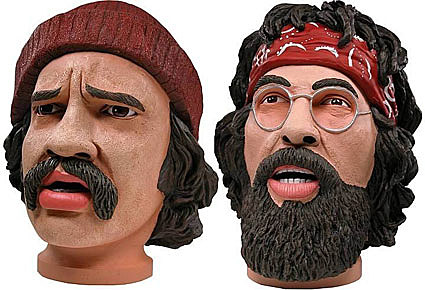 Cheech and Chong are touring and performing at Radio City Music Hall on January 31st, 2009. Tickets go on sale today at 4:20 (seriously). The tour is their first in 25 years, is called "Light Up America", and starts in Canada on September 5th. All dates below...

With nine albums released from 1972 through 1985, the duo was nominated for four Grammy Awards, winning the Grammy Award for Best Comedy Album with their third album, Los Cochinos, released in 1973. Big Bambu, their second album, was the biggest selling comedy record of all time in 1972 and remained so for many years. Their stunningly successful comedy streak transitioned to film in 1978 with their first movie, "Up In Smoke," the highest grossing comedy of 1978, topping $100 million at the box office. Cheech and Chong co-wrote and starred in a total of eight feature films together, all directed by Chong. The comedy duo was initially discovered at the Troubadour in Los Angeles.