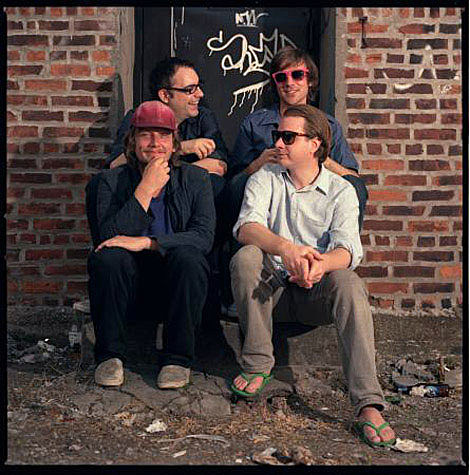 Brooklyn party-rock band Cheeseburger will be playing a show at the Bell House on Saturday, March 13th (after the venue hosts tough-act-to-follow The National for two nights). Opening the show will be Valley Lodge (a band that features writer/comedian Dave Hill) and a special set from another writer/comedian, Jon Glaser. Tickets are on sale.

Cheeseburger, who have their second album on the way, recently played Brooklyn Bowl on February 13th with Diamond Nights. At the show, singer Joe Bradley was absent (to be with his newborn baby), and the band was led by a series of guest vocalists who included Jon Glaser, Jason Green of Violent Bullshit, Diamond Nights' Morgan Phalen, and Les Savy Fav's Tim Harrington and Andy Reuland. A video of Tim Harrington (on a ladder) fronting the band is below.

Total that makes at least three times Jon Glaser and Cheseburger have shared a stage. The other time I'm thinking about was that Adult Swim show at Santos over the summer.

Cheeseburger will also be in Austin for SXSW, and one of their shows will be the BrooklynVegan/Annie from Panache Day Party at Spider House on Thursday, March 18th along with a ton of bands that including Tyvek, Thee Oh Sees, Jim Jones Revue, Everybody Was In the French Resistance Now and DM Stith (to just name a few).

Dave Hill performs his "Big in Japan" one-man show at UCB Theatre in NYC this Thursday, March 11th. Tickets are on sale. He'll also be performing as "The Dave Hill Explosion" at the same venue on March 25th. Tickets for that are up too.

A video and tour dates are below...