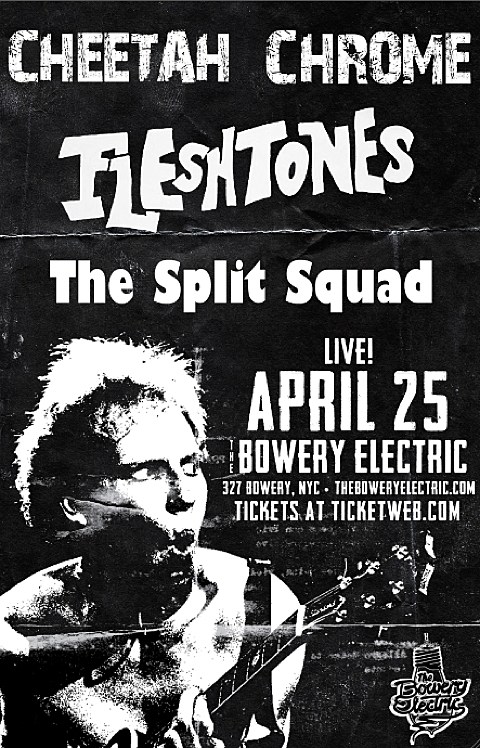 Three veterans of '70s-era CBGB will come together for a NYC show on April 25 at Bowery Electric. Headlining is Cheetah Chrome, guitarist of legendary Cleveland punks Dead Boys and Rocket From the Tombs, and before him it's The Split Squad (including Blondie drummer Clem Burke as a member), and Queens garage rockers The Fleshtones. (Fleshtones guitarist Keith Streng also plays in The Split Squad.) Tickets are on sale now. Show flyer above.

Speaking of Bowery Electric shows and legendary NYC punk venues, Max's Kansas City, which was home to many of the same bands as CBGB before closing in 1981, will celebrate its 50th anniversary with a three-night run at Bowery Electric from June 4-7. Lineups and more info TBA.

And speaking of Blondie, singer Deborah Harry is in the midst of a residency at Cafe Carlyle that wraps up this Saturday (4/4).

Listen to some Cheetah Chrome, Split Squad and Fleshtones, below...

The Split Squad - Now Hear This